Leinster do just enough not to lose in low-key encounter 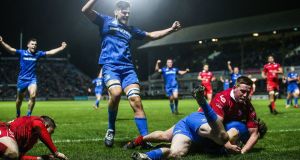 Considering the plummeting standards, prompted by the absence of so many key players, Leinster coach Leo Cullen can bank victory as a valuable four points.

This calamity of errors concluded with the ball skidding along the grass after the umpteenth Scarlets linebreak came to nothing. It was Paul Asquith who threw the final pass on a night to forget for the Scarlets winger.

Of course, he never will, but most of the 15,007 crowd will move swiftly onwards as a feast of rugby awaits.

Only James Lowe and Noel Reid escape this contest with any credit.

Even Jack McGrath took a while to blow off the cobwebs. His old pal Rob Kearney, also denied a natural injection of Vitamin D with Ireland on the Algarve, not fairing much better. Seemingly needing more exposure to Dublin’s winter, neither made man warmed to the initial task alongside a callow Leinster pack – Scott Fardy being badly missed – that was blessed by the opposition’s ineptitude.

These Scarlets have so clearly lost their way since Wayne Pivac was named future Wales coach. Or maybe it goes back to the indomitable Tadhg Beirne moving to Munster.

Either way, they failed to take advantage of this rare opportunity to win at the RDS.

Eventually a switch flicked inside McGrath’s brain. England are coming in seven days, and no British and Irish Lion wants to be a spectator.

McGrath has been injured recently, same goes for Kearney, and it showed on nine minutes when Scarlets scrumhalf Kieran Hardy slipped away from the loosehead’s flailing grip before stepping around the stranded Ireland fullback. Ciarán Frawley intervened with a flanker’s turnover but early scenes in this sluggish affair had the champions in disarray.

It is to be expected. The squad was severely tested this week by wounded (Ross Byrne still going through the head injury protocol) and a large contingent straining for Joe Schmidt’s approval.

The Ireland coach will glance at these messy exchanges, probably before dawn breaks in the morning, to see McGrath and Kearney also failing to halt a break by Ioan Nicholas (James Tracy to the rescue) as the soft blue defence racked up 14 missed tackles in the opening 20 minutes. And still, the Scarlets failed to add a single point.

“I think it was good for those guys to get some more minutes under their belt.” said Cullen. “Jack coming back from injury, Rob’s been out for a bit as well. It’s been a very disjointed period for the two of them. Delighted they got through 50 and 60 minutes. The two of them will be certainly better for it as well.

“The experience the two of them have. I think just getting through those minutes will be of value to them. Hopefully, they go well next week.”

When McGrath did find his grove with a mini-rampage to maintain the momentum created by Caelan Doris, Leinster finally entered the Scarlets’ 22.

It took 30 minutes for Frawley to opening the scoring and knowing that advantage, for offside, was in hand, he attempted to mimic Byrne’s crossfield kicking radar. Three points would have to suffice.

A comfortable lead was secured by the twisting Rory O’Loughlin on the stroke of half-time after a surging break by Conor O’Brien.

Lesson learned with a 10-nil lead?

Not yet. Frawley is building a reputation for flinging the intercept pass and after being almost picked off twice in the first half the Skerries man saw Asquith pluck his left to right spinner from thin air just seconds into the second half.

McGrath won a penalty from the resulting scrum.

Scarlets kept coming but the energy seeped out of them when Dan Jones scuffed a very kickable penalty.

That signalled the end for McGrath – good news for him – and Hugh O’Sullivan as Ed Byrne and Jamison Gibson-Park entered the fray.

Unlike McGrath, Kearney never found his straps, suffering the ignominy of a frontal missed tackle on openside Dan Davis which led directly to Hardy’s first try on 51 minutes. Jones’s conversion made it a three-point game before his penalty levelled matters on the hour mark, just as Kearney’s captaincy passed to Ross Molony with Frawley switching to fullback and Reid, an inside centre by trade, introduced at outhalf.

With a lack of cohesion from both sides, it took a solid Leinster scrum and smart Gibson-Park skip pass before Lowe bumped Nicholas to score yet another important try with 12 minutes remaining.

Leinster threatened to take control with Vakh Abdaladze – understudy to Andrew Porter and Tadhg Furlong – powering through midfield and the deftest of grubbers by Reid allowing Barry Daly to dive on the ball. Frawley converted and that seemed the game.

Not so, Johnny McNicholl exposed more weak defending to break two tackles and send Hardy clear for his second try. Jones’s conversion ensured a five-point game went down to the wire.

Nobody could win it, Leinster just didn’t lose it.