Ulster rescue a draw with last play to deny Benetton 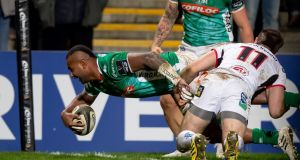 Benetton’s Ratuva Tavuyara scores a try against Ulster in the Guinness Pro 14 game at the Kingspan stadium in Belfast. Photograph: Morgan Treacy/Inpho

Ulster certainly came back to earth with a resounding crash after their European heroics of the previous two weeks and, yet, somehow managed to salvage a draw with the last play of the game against the visiting Italian side at the Kingspan stadium.

With the clock reading 80 minutes and Ulster looking gone, or at least with just one losing bonus point coming their way, they won a penalty and put the ball in the corner. Matt Dalton took the lineout and in the crazy scramble as they mauled over the line, referee Nigel Owens awarded a penalty try to tie the scores.

Though they failed to win, which was the object with Conference B not looking too advantageous for Dan McFarland’s men, the two points will be highly prized, though Benetton must have reckoned, and probably deserved, to taste victory in Belfast for the first time since 2011.

It also meant that the Italians – with Ian McKinley excellent throughout – moved into second and are still two points ahead of Ulster, who badly needed a win to not only improve their position in chasing Pro 14 knock-out rugby but also potentially avoid missing out on next season’s Champions Cup.

It was, of course, an Ulster side missing their Ireland squad members, and the injured Iain Henderson, though Benetton came to the Kingspan with 17 absent due to injury or national call-ups and few would begrudge them this thoroughly deserved result.

It took just 49 seconds before Ulster had the first try of game when Louis Ludik got on the end of Stuart McCloskey’s pass – in truth the centre could have probably gone himself – after the move was begun by skipper Rob Herring winning a loose ball on the ground.

Even though Billy Burns missed the extras, it all looked set fair from there with Robert Baloucoune prominent. But Ulster lost control and after Baloucoune had lost the ball in contract, the Italians moved the ball wide with lock Federico Ruzza smashing through Michael Lowry from close range after the visitors went the narrow side off a ruck.

McKinley then added an excellent touchline conversion to put Benetton in front after 10 minutes.

That seemed to stun Ulster, who then spent several minutes midway through the half failing to make the gainline from phased possession against some robust defending, forcing Dave Shanahan to unsuccessfully put boot to ball.

Indeed only a good tackle from Baloucoune on Luca Sperandio saved one situation for the home side as the Italians, with McKinley pulling the strings and winger Ratuva Tavuyara causing problems, looked far more dynamic with the ball while also being able to keep it for long periods.

The inevitable duly happened and though Benetton failed to get over the Ulster line, McKinley slotted a 39th-minute penalty after Alan O’Connor was penalised by Owens at the breakdown, the ball coming in off the upright to give them a deserved 10-5 interval lead.

Ulster knew they had to score first on the resumption and did so from the tried and tested driving maul route after two penalties were put into the corner, Herring getting on the end of it . Lowry missed the conversion as his kick hit the upright and bounced back.

With the scores now only tied at 10-10, Ulster had to go for it again but, yet again, it was the visitors who scored next.

After launching themselves into Ulster’s 22 from some strong forward carries it was Tavuyara who barrelled over from close range, swatting Jonny Stewart aside and McKinley then added another great conversion to put Benetton 17-10 in front on the hour.

Though Ulster had more purchase in the game, two lineout mauls failed to get going and then with just seven minutes left Rob Lyttle’s break only ended up with fellow sub Darren Cave being unable to hold the ball on the bounce.

After that, it was a case of Benetton closing the game out, or at least until that final penalty for Ulster and the penalty try.