Watson’s hand injury rules him out of Scotland’s squad 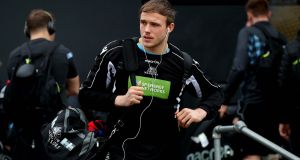 Glasgow’s Jonny Gray picked up an injury against Saracens but is expected to be fit for Scotland’s Six Nations clash against Italy. Photograph: Ryan Byrne/Inpho

Scotland have no concerns over the fitness of Jonny Gray and Ryan Wilson following their weekend injuries.

Hamish Watson has pulled out of Gregor Townsend’s Guinness Six Nations squad for the time being after suffering a suspected broken hand during Edinburgh’s Heineken Champions Cup win over Montpellier on Friday.

Gray and Wilson went off with shoulder injuries around the halfway mark of Glasgow’s defeat by Saracens and Townsend called up four players for the start of a training camp on Monday.

But assistant coach Mike Blair is sure both Glasgow forwards will be fit for the opening game against Italy at BT Murrayfield on February 2nd and Gray even trained in a non-contact session on Monday morning.

“Definitely,” Blair said. “They’ve got bumps and bruises and we will obviously wait to see how they clear up but at the moment it’s not something that we would be hugely concerned with.”

Watson was seeing a specialist on Monday to determine the extent of his hand injury but he is expected to miss the opening three Six Nations fixtures. Centre Sam Johnson also went off for Glasgow on Saturday but the centre appears to have overcome a head knock.