Leinster dish out a dose of the blues to Ulster 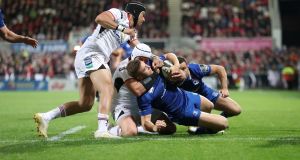 Moving into the 70th minute of a sold-out Kingspan Stadium, after another Ulster handling error, Luke McGrath veered away from another rock solid scrum and unerringly arrowed a 50 metre touch finder to within five metres of the Ulster corner flag.

There were only eight points in it, at 10-18, but the home faithful could smell the coffee, or something else. Immediately they began filing away. Leinster had been turning the screw since turning around with a 13-10 lead and the wind behind them, making far better use of the elements to dominate territory.

They were right. Leinster wouldn’t go away until McGrath scored his second try in the 78th minute. In the end, this was something of a bloodless coup, as well as further proof that Leinster have the best strength in depth of any Irish side.

Having made a dozen changes, they lost Noel Reid and James Ryan in the first quarter, yet this merely led to the 20-year-old St Andrews product and Irish Under-20 star Jordan Larmour, in his second year in the Leinster academy, to score a wonderful second try for his province.

If that was the defining moment of the first half, the moment of the second was provided by Sean O’Brien, who led them superbly from number eight, in teeing up a try for McGrath that pushed them two scores ahead. The likes of Cian Healy and the aforementioned McGrath, also made a big difference off the bench.

The rivalry was demonstrated in the frequency of the big hits, and this was intermingled with three bust-ups in the first quarter of an hour. But there was also plenty of width, tempo, and ambition in the way both sides went about their business on a perfect playing strip and in dry conditions, albeit the ball may have been a little dewy judging by the number of handling errors, and there was also a strong breeze, which Ulster had first use of.

That said, Leinster had much the sharper cutting edge out wide and the better ability to transition from defence to attack quickly. Ulster were also missing first-choice props Kyle McCall and Wiehahn Herbst.

They were also without their first three scrumhalves after John Cooney failed to recover from the chest injury he picked up in last Sunday’s defeat in La Rochelle. With Dave Shanahan hamstrung, and Paul Marshall absent for personal reasons, the 25-year-old Ballynahinch captain Aaron Cairns made his first start at scrumhalf, having had one cameo on the wing last season. He performed creditably too, content to shift the ball out to Christian Leali’ifano.

The home side were led out by Rory Best on the occasion of his 200th game. But even allowing for the lineout malfunctions being more than merely about his throw, his losing run with Ulster, which now numbers eight games, continued.

Ulster actually began strongly, and had the home crowd in full war cry. Stuart McCloskey’s inside ball to Luke Marhall, whose grubber veered away from Tommy Bowe. Instead, a couple of phases later, O’Brien couldn’t be shifted off the ball to win a relieving penalty. However, when Leali’ifano launched an up and under, and Tommy Bowe challenged Rob Kearney in the air, the ball deflected off both of them and so Rory O’Loughlin was adjudged offside when gathering the ball. Lealiifano unerringly landed a difficult 45 metre penalty.

Inside the first three minutes, Leinster lost Noel Reid, to be replaced by Larmour, who came on at outside centre, with O’Loughlin shifting inside. They also lost the seemingly concussed Ryan in the 16th minute, to be replaced by Ross Molony.

Leinster are nothing if not resourceful and well stocked. They soon demonstrated their ability to transition from defence to attack when Rob Kearney ran the ball back into contact. Jamison Gibson-Park explored a spacious blindside, using his footwork and pace to beat the first man. Ross Byrne and O’Loughlin carried it on, before Larmour went wide where, lo and behold, there was Best, having covered acres of ground, to make the tackle.

But they weren’t to be denied for long. Gibson-Park orchestrated another bout of flat attacking through the phases before again exploring the blind side to good effect. Ulster hadn’t reloaded sufficiently, giving Leinster a three-on-two, and as Iain Henderson sought to cover two men by sliding across, Larmour stepped him delightfully from inside halfway, then accelerated around Cairns and took the latter’s attempt to dislodge the ball with his covering tackle to score his first try for Leinster. Byrne converted for a 7-3 lead.

When Ulster then came rumbling off a lineout, James Tracey poached for another relieving penalty. Chris Henry took exception to Gibson-Park bumping into Cairns after the whistle had gone for a knock-on by Leali’ifano, and when dragged back by Dave Kearney so sparked a third bout of handbags at dawn.

Callum Black then tackled the sniping Gibson-Park, and Sean Reidy was over the ball to earn Ulster another penalty and an attacking lineout on the Leinster 22. Best hit Alan O’Connor in the air, and when the attempted maul was driven back, McCloskey again showed his good hands with a disguised pass out the back to Leali’ifano, who skip passed to Luke Marshall, before Bowe showed nice hands in drawing in Dave Kearney and releasing Charles Piatau on the loop.

It took three men to eventually bring him down well behind the gain line, before Leali’ifano stepped and nearly made line, and Cairns did only to be held up by Devin Toner. The Ulster scrum, buttressed by the return of Best and reverting Henderson to the second-row alongside O’Connor, squeezed the Leinster tight-head side - Tadhg Furlong had just received treatment for an injury- to take Jordi Murphy and the Leinster back-row out of the equation.

Sean Raidy, having shifted to eight following the earlier replacement of Jean Deysel with Robbie Diack, showed superb leg strength to take tackles by Gibson-Park and Ross Byrne and burrow over for the try. Leali’ifano converted but Leinster again responded well, Byrne drawing the sides level after another effective snipe by Gibson-Park when Callum BVlack was pinged for not rolling away.

Leali’ifano was then alert to Byrne’s cross kick to his namesake Adam. But the Ulster lineout malfunctioned, a combination of a slight overthrow and inadequate lift, and Dan Leavy charged at the home line. On and on they went through the phases earning a penalty for offside which Byrne slotted over to putt them in front.

A good half of rugby finished in undistinguished fashion, with Ulster losing another lineout, before Stockdale and Cairns each kicked out on the full either side of a knock-on by Leavy.

Leali’ifano brought the second-half quickly to life when beating both Furlong and Toner, but from his chip ahead, Piutau blatantly pushed Rob Kearney in the back to concede a needless penalty.

When McCloskey was, most unusually, stripped in midfield, it looked like Gibson-Park would score when deftly gathering his own chip ahead but instead of diving for the line he opted to pass inside to Dave Kearney, and the ball was deflected from finding the winger.

Playing into the wind, Ulster weren’t afraid to run from deep, Marshall making one outstanding carry and when they moved it wide from inside their own half and Bowe’s pass out wide was blocked one-handed by Dave Kearney, the winger was handed a a yellow card.

Instead of Leinster having to contain an Ulster storm, it was they who struck decisively as they again demonstrated their ability to transition from defence to attack. Rodney Ah You coughed up the ball in the middle of the pitch, and Toner gathered to shift the ball to O’Brien.

Famed for his bullocking strength, dynamism and work in contact, the Leinster captain and number eight then displayed his footballing nous. Feigning to pass wide, he instead pulled the ball back for Adam Byrne. When the winger then freed his hands in the tackle after a strong carry through two men, there was O’Brien, having looped around him to gather and burst clear.

What he did next was even better, a show and go selling the mother of all dummies to Stockdale before he carried on and then skip passed for Luke McGrath to finish with winger’s alacrity out wide. Although Byrne couldn’t land the touchline conversion, they were now two scores clear.

Nor did they let their grip on the game slip. Leinster used the wind to play territory better, sucking and squeezing the life out of Ulster when Luke McGrath arrowed a 50 metre touch finder off a scrum inside half-way to within five metres of the corner flag. The Ulster line-out, just as awry after Rob Herring replaced, nearly coughed up a try when the ball deflected off Kieran Treadwell’s tap down but Jordi Murphy didn’t gather inches short of the line.

Leinster never let Ulster out again until McGrath struck again two minutes from time. Jack Conan made inroads towards the line off a strong scrum, after a sequence of one-off runners, McGrath picked and burrowed through the tackles of Jonny Stewart, Ulster’s debutant scrumhalf off the bench and Rob Herring to score under the posts.

At the end, Dave Kearney was even looking for a bonus point try but the ball brushed the line from his kick ahead. Weary Ulster players filed off a subdued Kingspan and for some of them they now face a long haul from London on Monday to Port Elizabeth for their meeting with the Southern Kings next Saturday.