Cheetahs struggling to get up to Pro14 speed 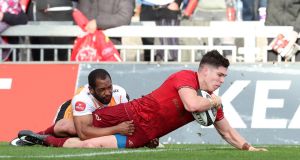 Munster continued their brilliant start to the season and inflicted another big defeat on championship newcomers Cheetahs.

It was Munster’s inaugural Pro14 game at Thomond Park and they led 22-6 at half-time with Alex Wootton scoring twice after Tommy O’Donnell’s opener.

Munster had the bonus point by the 49th minute - Wootton scored another two tries after half-time with Chris Farrell, Jean Kleyn and Simon Zebo also touching down.

Munster held a 10-0 lead after Ian Keatley converted O’Donnell’s sixth-minute effort. Robbie Petzer scored a penalty in the 16th minute but Munster hit back, Wootton touched down brilliantly in the left corner.

Petzer kept the Cheetahs ticking over before Munster struck for their third try. All of the backs were involved before Andrew Conway sent Wootton over in the left corner.

The Cheetahs hit back after the break when Francois Venter caught the kick-off after half-time and broke the defensive line before William Small-Smith did the rest from inside his own half.

But Munster got in for two tries in as many minutes. Kleyn bulldozed his way over in the 49th minute and then Farrell scored his first try, with Keatley’s conversion giving them a comfortable 34-11 lead.

Wootton scored again before his replacement Zebo piled on the misery before Henco Venter scored a consolation.