Ragged Ulster almost made to pay at Treviso 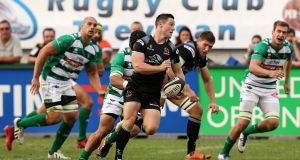 Ulster at least made it two wins from two but this was a terribly scruffy performance which saw Les Kiss’s side stumble over the line after losing control of a game which they led 21-0 with just 20 minutes to play.

Indeed, the northern province, who scored three tries, were lucky to hold on to claim the win as the abrasive Italians finished the game with a powerful surge by scoring 14 unanswered points - with former Leinster player Ian McKinley getting the try of the night late on - and could have even snatched what had seemed an unlikely draw from the last play of the game.

Ulster, who worked Andrew Trimble over the line twice in the first half - which ended with them leading 14-0 - seemed to have secured the game on 60 minutes when the ever-sharp John Cooney charged down a clearance which allowed Jacob Stockdale get the visitors’ third touchdown.

In truth, though, an inaccurate Ulster - who butchered two first half try-scoring chances - had only played in fits and starts up to that point and their lack of control invited Treviso back into the contest with second row Federico Ruzza and then McKinley crossing the Ulster line with the latter adding both conversions for a losing bonus point.

Ulster were up and running after just eight minutes after Trimble ran in unopposed from a messy lineout. Cooney - who missed an 18th minute penalty - converted and then did so again after the scrum-half put Trimble in for his second on 23 minutes.

Treviso - who had also missed an earlier penalty from McKinley - then had a score from winger Angelo Esposito ruled out by the TMO thanks to Cooney’s last-ditch tackle.

But the visitors blew two clear-cut tries in a rather scrappy opening half which only saw them lead 14-0. It took until the hour before there was another score when Cooney converted a charge-down try he had created for Stockdale.

At 21-0 it only seemed a matter of time before Ulster managed to gather up a bonus point but their performance just became even more ragged and Treviso - who had turned down a kickable penalty at the start of the half - defended heroically and then snaffled two deserved scores from Ruzza and McKinley before coming so close to a third with the clock in the red.

For Kiss, a win, but much food for thought with champions the Scarlets racking up at the Kingspan on Friday.

Castrogiovanni remembers ‘beautiful battles’ with Ireland 05:15
Frank Lampard defends Chelsea’s rearguard ahead of Sevilla clash 05:00
Stockdale and Ringrose on board with expansive Irish game plan 01:30
Bennett girding his loins for impossibly unpredictable Vuelta 01:01
Captain Fernandes for Man United as PSG look for revenge 22:30
Here is your handy guide to sport on television this week