Bonus is in the finish as Leinster paper over early cracks 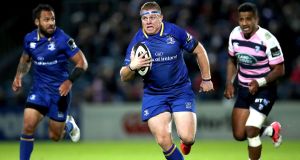 Leinster’s Seán Cronin on his way to scoring a try during the Guinness Pro 14 match against Cardiff Blues at the RDS. Photograph: Bryan Keane/Inpho

All cracks get papered over by the ruthless finish. When Ross Byrne, after an unconvincing night until it really mattered, put one of his trademark crossfield punts high into the corner and Barry Daly soared, juggled and landed for Leinster’s third try.

Never in doubt. Except for a ropey opening hour littered with errors and slow decision making.

Leinster’s mini voortrek, to Port Elizabeth before finishing against the Cheetahs at altitude, this next fortnight will require a wider use of resources to avoid the ignominy of being the first Pro 14 side to lose in South Africa (Zebre should take care of that).

But, despite Byrne’s impressive poise late on, absent halfbacks Jamison Gibson-Park and Joey Carbery should benefit the most from this misguided performance.

If it’s too complicated it is not going to work. Bill Belichick said that. The Stuart Lancaster blueprint espouses similar means for getting Leinster from A to B with minimum fuss.

It can be explained away as early season cobwebs. And there was never any need to panic against a Cardiff Blues outfit that failed to realise a valuable four points was there for the taking.

That 13 Leinster men trotted back over halfway with a 7-6 lead after 32 minutes showed how dominant they should be. Isa Nacewa was in the sin-bin for clothes-lining Alex Cuthbert while Rob Kearney was being treated for a hamstring injury.

The Ireland fullback, who avoided a yellow card for a late tackle on Garyn Smith, was replaced at half-time by Daly, and is unlikely to make Tuesday’s plane to South Africa (Dan Leavy is another injury concern). This forced a reshuffle with Jordan Larmour given the run of the back field on his home debut.

Nacewa returned as Ross Byrne converted James Tracy’s try after the hooker was mauled over the Cardiff try line.

Byrne then atoned for an earlier missed penalty to put Leinster 10-6 ahead at the turn.

Otherwise the opening 40 minutes at a damp RDS was as much a chance for the season ticket holders to reacquaint themselves with the old horse arena than to see any decent rugby. Officially 13,535 were on site. A good few must have looked out the window and slumped back on the couch.

Willie Duggan was remembered. The pre-match silence in memory of the legendary Kilkenny and Blackrock number eight fittingly turned into collective applause.

Mal O’Kelly was also spotted in the new stand.

Neither man would have many complaints about Scott Fardy. A blindside by trade, the Wallaby has enough size and displayed plenty of grunt in the five jersey but it was his turnover that created the chance for Seán Cronin to race clear for the try that put Cardiff out of reach.

So long as the 33-year-old’s body holds up the homegrown locks will be battling it out number four if Devin Toner – this was his 200th game in blue – remains in the Ireland squad come November.

James Ryan, currently nursing a shoulder issue, will force his way into this conversion soon enough.

There is plenty more to come from Leinster; personnel wise and improvements in how Lancaster wants them to attack. The shape is visible. Next comes execution. Byrne has some way to go in this regard. Much of the decision making, which tended to be low kicks into space, came from Nacewa at second-five-eighth.

Some urgency was badly needed after Scott Shingler’s third penalty made it 10-9 early in the second half.

Scrum dominance at least gave Byrne a chance to find his kicking groove. Both uprights helped him make it 13-9 but a poor kick over the top kept Cardiff in the fight.

On 52 minutes Leo Cullen introduced as dynamic a frontrow as any team in this Pro 14 league can boast. Cronin, Ed Byrne and Andrew Porter got to work.

Cardiff collapsed the next maul but Byrne’s fifth strike at goal, again, hit the post, this time bouncing into visiting hands.

The pack needed to take over. And they did as Byrne planted a central, long-range penalty to finally create some breathing space on the scoreboard.

Leinster won on autopilot with Cronin dashing away, like only he can, with 10 minutes remaining on the clock.

Only then did they come alive.