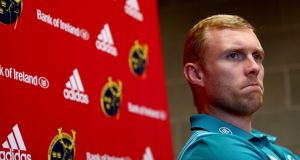 Keith Earls says he has locked away all the medals and trophies he has won as this allows him focus on the challenges and targets he wants to face for the new season.

The 30-year-old, coming off a superb season for both Munster and Ireland, is poised to return to action this weekend after the summer break, as Munster travel to take on Cardiff Blues on Friday.

One of the few links with the 2009 Grand Slam, Earls had to watch from the sideline injured as the Six Nations crowns were annexed in 2014 and 2015.

But having battled back from injury, he played a key role in the Grand Slam success earlier this year, with his performances for his province seeing him collect a Player of the Year award on top of a pile of other individual awards.

And while Earls admitted he might occasionally glance at the Grand Slam medal, all the other trophies are out of sight as he prepares for another season for province and country.

“The trophies and the medals are locked away. I don’t even keep them out to look at them.

“I put them away and maybe look at them when I retire, keep my focusing now on getting better. I enjoyed last year, but once I got to the beach it was about being a father and about relaxing and living a normal life.

“I have set my goals out for this year, but I won’t be pondering about that season.

“Some fellas do it differently, some fellas like looking at them, but it does not really bother me . . . the Grand Slam medal I will take that out and look at it; the individual ones, no.

“I always moved on. My thing is team medals and that is what I enjoy the most,” said Earls, who has chalked up 152 appearances for Munster on top of 70 Irish caps.

Ireland’s successful tour to Australia has also been put to bed, and the countdown to the World Cup, as well as the November internationals and the defence of the Grand Slam, can all wait as, for now, Munster are Earls’s top priority. And he’s happy with what he has seen so far and the new faces who have come on board.

“I think it is great for the squad in general. We have depth everywhere now which is great. I think that is where we probably struggled in the last couple of years. Look, once I’m fit and back myself and give the lads on the wings a run for their money.

“You see the depth Leinster have in their squad and looking at the national side as well, the depth we have in fellas who are coming in. You could lose two or three players in Leinster and another fella will come in who’s just as good.

“I think we have that now this year and the competition is there, which is driving fellas. A few of us probably got a bit relaxed in our position and weren’t hungry enough to be out there but fellas are edgy now, between back three and centres, 10s, back row, second, it’s all over the park now.”

The arrival of his Irish team-mate Joey Carbery is exciting

“All the talk is about Joey being a great signing but I think the other four lads as well will have something to say, especially the way we’re going now, shape-wise and running a lot more.

“We probably lacked that bit of detail last year, which made our 10s look a bit out of sync and few of them got a bit of unfair criticism. I think it was the players around them that didn’t make them look good, which is important. But now the team shape is coming and the 10 should only have to catch a ball and pass it. And listen, which is good now, we’re playing more expansively and we’ve a lot more rounded game now than just kicking.”

Earls will be 31 early next month but he knows there is plenty of space in those cupboards for medals and trophies before he hangs up the boots.

“Last season was enjoyable, [I will now] try and repeat it hopefully and go a step further. The main thing for me is to keep enjoying it,” he added.