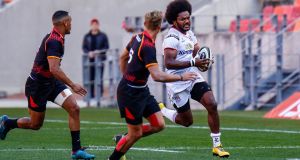 It was an ugly and frustrating affair as Ulster required another second half push, this time a much more shoulder to the wheel effort than their recent dramatic escapes, to bring up three wins from three and go top of Conference B.

First up, they disappointingly failed to come away with a bonus point, their three tries against the still winless Kings coming in the second half from a trio of first-time scorers in Marcell Coetzee and replacements Angus Kernohan and Angus Curtis.

Frankly, though, the visitors wouldn’t have deserved the reward of maximum points, while the whole affair at a sparsely attended Nelson Mandela Bay Stadium, in Port Elizabeth, was hardly helped by the performance of Scottish referee Sam Grove-White who was overseeing just his second Pro14 game.

While the stop-start nature of the clash was dictated by Grove-White’s whistle, due to the Kings’ repeated infringements, the referee awarded a staggering 20 penalties against the home side - 14 in the opening half - but only sent one player to the bin when showing flanker Martinus Burger a yellow card in the 19th minute.

The referee, instead, issuing repeated warnings to the Kings - while Ulster’s sense of grievance was further fuelled by having both Alan O’Connor and Rob Herring yellow-carded in the opening 40 minutes with the latter’s binning inviting the Kings back into the game.

Afterwards, though, Ulster head coach Dan McFarland chose not to criticise the officiating but, rather, focused on Ulster’s lack of ability to put points on the board during dominant periods of the game.

“We’ve got to play the game as it is and that’s the way it happened,” he said.

“It’s difficult when there are a lot of infringements in the game but it’s up to us to make our dominance count.

“I felt we had created enough opportunities in the first half that if we had been really ruthless in what we were doing we would have got a couple of tries.

“We did get a try but it was taken off the board for a clean-out by Alan (O’Connor),” added a frustrated McFarland.

Ulster were hardly helped by losing Will Addison to illness before kick-off and then John Cooney left the action early needing stitches to a head wound after putting the visitors 9-0 up ahead of his 32nd minute departure.

Cooney also thought he had scored a try when, with the Kings down to 14, he had darted over from close range after 21 minutes only for the TMO Johan Greefe to rule the score out after O’Connor was adjudged - it looked a harsh enough call - to have cleared out Stephan De Wit illegally.

And then with Ulster’s maul defence creaking, along with their lineout and breakdown work, Herring was also sent on his way just before half-time - and eight minutes after O’Connor’s return - forcing Ulster to play 20 minutes of the game below full complement.

To make matters worse, the province conceded immediately at the start of the second half when, after they made a total mess of receiving the restart, skipper Michael Willemse got over from a driving maul which splintered Ulster’s pack worryingly easily.

Masixole Banda’s conversion tucked the Kings in 9-7 behind and it was game-on in a scrappy encounter which looked far too fast, loose and error-ridden for Ulster’s liking.

Eventually, though, Ulster put some daylight between the sides after going direct with Coetzee muscled his way over on the hour on the third scrum re-set near the Kings’ line, though the grounding seemed unclear, with Billy Burns’ conversion making it 16-7.

From there, the visitors gradually got the upper hand - though the bonus try always looked unlikely - with Kernohan nipping over on the short-side on 66 minutes. Craig Gilroy had a score ruled out with eight minutes to go before, with the last play, Curtis made it over with Peter Nelson converting.

Ulster now face the winless Cheetahs, who hammered at home by Glasgow Warriors last Saturday, in Bloemfontein on Friday.