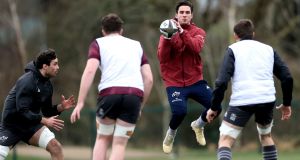 Joey Carbery is set to be named on Munster’s bench for their Guinness Pro 14 game away to Cardiff on Friday night for what would be his first outing in almost 14 months.

The 25-year-old has been dogged by complications with an injured ankle initially sustained in the World Cup warm-up match against Italy at the Aviva Stadium in August 2019, although he did travel to Japan where he appeared in three matches off the bench, the last of them in the quarter-final defeat by the All Blacks.

Since then Carbery has played just two matches for Munster, in the derbies against Leinster and Ulster over the 2019-20 festive period. His last outing was against Ulster on January 3rd 2020.

In addition to complications with his rehabilitation which has led to several false dawns, the luckless Carbery also suffered a wrist injury while on the road back.

But Munster have been issuing increasingly positive medical updates since around mid-January, while treading carefully with the player’s return to match action.

Over a month ago, speaking to the Munster website, Carbery himself spoke publicly for the first time in ages, also prompting hope of a return, when admitting: “It’s been pretty tough. Obviously, it’s not nice being injured but I’m pretty blessed to have such a good physio and strength and conditioning team around me and it’s been great to see the lads do so well.”

“I’d love to be out there, but it’s been such a good start to the season so far. It’s never nice to be injured, but hopefully things change soon.

It was tough at the start, we kind of had an end-game in sight and not to hit that mark was almost more disappointment.”

“This time has been relaxed, I’m ready when I’m ready and it’s kind of helped a lot.”

That time appears to be now and everyone will be wishing the gifted 25-year-old some overdue good fortune as he seeks to restart a career that still has plenty of time to realise its rich potential.

Ireland v France in doubt due to hotel quarantine policy 11:47
Trust trumps Zoom for Terry Hyland and his Leitrim exiles 08:00
US Masters: Hideki Matsuyama shines after the rain to take control 01:26
Ulster’s power game finally comes good as Northampton felled on home turf 22:34
Real Madrid go top of La Liga after Clasico win over Barcelona 22:59
Here is your handy guide to sport on television this week