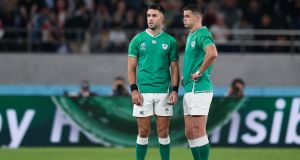 Conor Murray and Johnny Sexton look set to be reunited for a 64th start together as the Irish half-backs when Ireland face Italy in Rome. Photograph: Craig Mercer/MB Media/Getty Images

Andy Farrell has never wavered in his belief that what he regards as a full-strength Irish team will take to the Stadio Olimpico come kick-off (2.15 Irish time) in Rome next Saturday.

This is the Guinness 2021 Six Nations and, all the more so after the narrow defeats by Wales and France, Ireland are in must-win territory against opponents who have lost 28 matches in succession in the championship.

Accordingly, Farrell has named what is essentially an unchanged 36-man squad to assemble on Monday morning in the IRFU High Performance Centre at the Sport Ireland Campus in west Dublin.

The only alterations from the original squad named at the outset of the tournament sees late call-ups Ed Byrne, Ryan Baird and Jack Conan retained, while the injured Quinn Roux and Caelan Doris, as well as the suspended Peter O’Mahony, are absent.

There were “no significant injury concerns” for the 12 players who were released back to their provinces and featured in the quartet of Irish wins in the Guinness Pro14 over the weekend.

Hence, as expected, James Ryan, Conor Murray and Johnny Sexton, along with David Kilcoyne, have all been named in the belief that they will be able to train this week after missing the 15-13 defeat by France at the Aviva Stadium.

No individual performances by players outside the 36-man squad over the weekend were of sufficient quality to force their way in. So it is that John Cooney, Luke McGrath and Kieran Marmion all miss out again as Craig Casey is retained as the third scrumhalf, even though the 21-year-old remained an unused replacement while Jamison Gibson-Park completed the full 80 minutes in the absence of Murray against France.

Despite another creative and assured display in Connacht’s bonus point win over Cardiff, unsurprisingly Jack Carty remains on the outside looking in, as does Harry Byrne, with Billy Burns and Ross Byrne retained along with Sexton as the three outhalves.

This is a further clear signal that, all being well, Murray and Sexton will be reunited for a 64th start together as the Irish half-backs, and 66th time in Test rugby, with Gibson-Park and either Burns or Byrne as back-up.

The younger Byrne was again called in to train with the senior squad last week, further proof of the regard in which the management hold him, even if his exclusion from this squad will disappoint his growing fan club.

Yet if Byrne wasn’t going to feature in Rome then, as is perhaps the thinking, he’s better off playing for Leinster against Glasgow next Sunday and in their crunch Conference A summit meeting away to Ulster on Saturday week.

If there is to be any experimentation, then it could see an oft-hinted move back to loosehead for Andrew Porter against the Azzurri, partly in a desire to have both him and Tadhg Furlong on the pitch from the off. Then again, Kilcoyne’s return to fitness perhaps reduces this need.

The anticipated return of James Ryan would give Farrell, Paul O’Connell and co a decision to make as to keeping Rhys Ruddock in the back-row or moving Tadhg Beirne there. Otherwise, the team and match-day squad are liable to follow along established lines..

As the threat of Covid-19 continues to hang over the tournament, the Irish squad will be tested again this morning, having been tested without any positive cases on Monday, Wednesday and Friday of last week.

Meanwhile, the third round game between France and Scotland, scheduled for the Stade de France next Sunday, remains under a very real threat after five French players who started against Ireland tested positive for Covid-19 along with four members of the support staff, including head coach Fabien Galthié and assistant coaches William Servat and Karim Ghezal.

In addition, two Toulon players, Swan Rebbadj and Jean-Baptiste Gros have been deemed close contacts and therefore have to go into isolation, yet despite all of this disruption, the French have named a revised 31-man squad, which demonstrates their determination to press ahead with the game against Scotland.

Dorian Aldegheri, Teddy Baubigny, Hassane Kolingar, Maxime Lucu, Jonathan Danty, Yoram Moefana and Donovan Taofifenua, who have a combined total of 18 caps, have all been called up to the squad.

If the opening round was the best time to face a rusty England, then similarly Scotland might be equally fortunate to face a rejigged French side at the most opportune time next Sunday.

The French squad were tested again in Marcoussis last night, with the results expected on Monday. If they are unable to play the game, then it will be postponed and rescheduled on the earliest available date (possibly Saturday week, March 6th) as opposed to the game being cancelled and awarded to Scotland.

Whereas the Autumn Nations Cup had a final weekend and no room for rearranged games, as was the case last year the prestige and integrity of the Six Nations demands that all matches are played.