Joey Carbery has the chance to shine against Ospreys 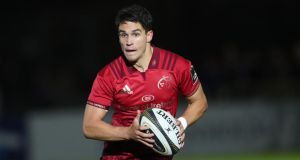 Munster’s Joey Carbery has been handed his first start for their clash with Ospreys in the Pro14. Photo: Billy Stickland/Inpho

Munster will seek to expunge the disappointing nature in performance terms of last weekend’s defeat to the Glasgow Warriors. The fact only four players survive from the trip to Scotland is not predicated on losing alone, more a reflection of a rotation policy that prevails over the fledgling weekends of a new season.

Peter O’Mahony, the Munster captain, and fellow international Andrew Conway appear in a competitive environment for the first time in the current campaign, Joey Carbery and Tadhg Beirne swap the bench for the run-on team, while South African flanker Chris Cloete has recovered from the arm injury that has kept him sidelined since last February.

If they’re the headlines then there remains a sizeable narrative in discussing the lineup with seven changes to the pack. Number eight Arno Botha is the only player retained, while fullback Mike Haley, the in-form Darren Sweetnam and Sammy Arnold back-up from last weekend. Carbery gets to run the game from the opening whistle, the initial challenge will be to get the backline firing, all the while aware that every aspect of his performance will be scrutinised closely. JJ Hanrahan was handed the 10 jersey initially, Carbery gets his chance with Ian Keatley restored to the matchday squad.

O’Mahony and Cloete will give Munster a huge presence at the breakdown, particularly in the absence of a significant contingent of Lions and Wales internationals in Alun Wyn Jones, Bradley Davies, Justin Tipuric and Dan Lydiate, all rested for this match as is wing George North, who scored two tires on his debut for the Welsh franchise in a narrow 17-13 victory over Edinburgh.

North returned to Wales during the summer having spent the previous five seasons with the Northampton Saints. Ospreys coach Allen Clarke, the former Ulster and Ireland hooker, has freshened up his team even more so than his counterpart Johann van Graan by making 13 changes for the trip to Cork.

Young Munster centre Dan Goggin is an excellent young player and he’ll be keen to grasp an opportunity to lay down a claim for regular involvement. When Chris Farrell returns from injury Munster will have decent depth to their midfield options. The same applies to the backrow. Darren O’Shea, who captained his province’s A side to victory in their opening Celtic Cup match, gets his chance alongside Beirne.

Van Graan will expect a positive reaction to last week’s display and that’s likely to be facilitated by the number of frontline players that the Ospreys are missing as they try to get as many of their players as possible up to a playing rhythm. In the past, Irish teams have been accused by the British media of sending out ‘under-strength’ sides in the Guinness Pro14 but it seems that the intelligent husbandry of players might be crossing the Irish Sea.

Tánaiste and Minister for Foreign Affairs and Trade, Simon Coveney will officially open the new modified 3G pitch beforehand, the Cork camogie team who recently won the All Ireland title will be presented to the crowd at half-time and realistically the perfect end to the night would be a bonus point victory in which the home team individually and collectively hit their straps.

Lewis Hamilton the fastest in Austria Grand Prix practice 12:27
Ole Gunnar Solskjaer: ‘The sky’s the limit’ for Mason Greenwood 12:07
Monica Seles: The warrior queen who could have been the best ever 11:25
Thrillingly fluent, thrillingly pointless: Man City’s riposte comes too late 08:54
World Athletics freezes out Russian athletes after $5m fine goes unpaid 08:41
Here is your handy guide to sport on television this week