Springboks desperate to get World Cup buildup on track 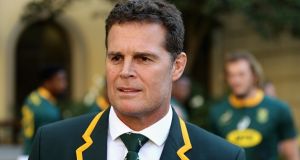 South Africa coach Rassie Erasmus may have been exaggerating when he said defeat to the All Blacks on Saturday could have him fired but the comments underscored how desperate the Springboks are to be competitive at the World Cup.

Erasmus was given a six-year contract last year to rebuild the fallen heavyweights but defeats in the last two Rugby Championship tests by Australia and Argentina have put him under pressure.

For all the pledges of support from the South Africa Rugby Union, that pressure will only ease with a strong showing against the champion All Blacks at Wellington Regional Stadium.

“The moment you beat New Zealand in New Zealand you’re back to where you want to be and your planning is on track and you can tell yourself you’re really contenders at a World Cup,” Erasmus told reporters on Thursday.

With South Africa drawn in the same World Cup group with New Zealand for the first time, and their pool B opener in Yokohama just over a year away, little wonder Erasmus is looking ahead.

He named a strong starting side for Saturday’s clash, restoring Handre Pollard to the pivotal outhalf role and Malcolm Marx as starting hooker.

Elton Jantjies and Bongi Mbonambi, who both started in the 23-18 loss to the Wallabies in Brisbane last week, have been dropped to the bench.

“It’s going to be an uphill battle against a team who is number one in the world, who dictate almost every facet of the game,” Erasmus said.

“But this team is pretty much our strongest available . . . I really think after this game we will know where we stand.”

He bulked up his loose forwards with Sam Cane and Liam Squire returning, while first choice halfbacks Aaron Smith and Beauden Barrett were also recalled.

Hansen’s midfield combination has again been reshuffled with Ryan Crotty returning after he recovered from a nasty head clash with Jack Goodhue in the first game against Australia.

Crotty has had a litany of head injuries in the last two years and concerns had been raised about his health, but the 29-year-old said he had convinced not only the doctors but also his mother and sister.

“I’ve had to convince them (I’m) all right so, no, they’re fine and they’re excited that I’m back out there,” Crotty said of his family.

“Honestly, there’s no stone left unturned around head injuries these days, so the diligence around that gives you confidence.”

1 Worst sporting moment: White knuckle ride on a hate-filled night at Windsor
2 Acute disillusionment the only response to growing FAI debacle
3 Bundini Brown: The man who invented ‘float like a butterfly, sting like a bee’
4 Worst Sporting Moment: Mighty Nijinsky misses moment of triumph
5 Brennan concerned over scale of the challenge facing the GAA next year
Real news has value SUBSCRIBE

Worst Sporting Moment: Mighty Nijinsky misses moment of triumph 06:00
Brennan concerned over scale of the challenge facing the GAA next year 06:00
Acute disillusionment the only response to growing FAI debacle 06:00
Irish roots with the bit of Jo’burg dog: Curtis Campher has arrived 06:00
Leipzig see off Atletico to set up PSG semi-final 22:15
Crossword Get access to over 6,000 interactive crosswords