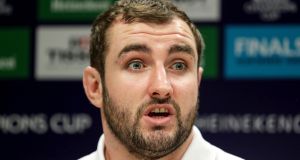 Munster and James Cronin have both accepted an independent judicial officer’s decision to make the 29-year-old “ineligible” between April 15th to May 16th due to a doping violation.

The Ireland prop will miss no game time as rugby will not be played during this period due to the Covid-19 pandemic.

Cronin tested positive for prednisolone and prednisone following the Munster’s Heineken Champions Cup match against Racing 92 at Thomond Park on November 23rd, 2019. He replaced Jeremy Loughman 49 minutes into the 21-21 draw.

Prednisolone, a synthetic steroid, and prednisone, a synthetic drug similar to cortisone, are banned substances under Section 9 of the World Anti-Doping Agency (Wada) prohibited list.

Antony Davies (England), the independent judicial officer appointed by the EPCR, accepted that Cronin, who had been “unwell” leading up to the match and was “prescribed antibiotics” by Dr Jamie Kearns but collected medication “intended for another customer” at his local pharmacy.

Kearns, the Munster team doctor, had emailed a prescription for the antibiotic amoxicillin.

Cronin, it was proved, bears “no significant fault or negligence” due to a “very serious mistake by a pharmacy.” However, Davies noted that he “could have done more to avoid the violation” as “players cannot rely blindly on the advice of their team doctors” and the player “ought to have at least stopped to consider” why he was given two sets of medication instead of one. Davies also adds “a simple Google search of ‘predisolone’” would have shown that the drug is on the banned list.

“He bears at least some fault,” Davies concluded.

The decision also considered that the team doctor had informed Cronin that he had “prescribed ‘antibiotics’ and did not specify the name of the particular antibiotic.”

When Cronin went to the pharmacy, on November 22nd 2019, he collected two medications, the amoxicillin and Prednesol, which is on Wada’s prohibited list, but it has been established that this was for another client of the pharmacy.

The Cologne laboratory that tested Cronin’s sample said his explanation was “scientifically plausible” and the judicial officer did express “some sympathy” for him but Davies added, “The violation could have been avoided had the player (and his team doctor) put better safeguards in place.”

Munster are satisfied the Cork man, who came through their academy system, testing positive for a banned substance was “entirely unintentional.”

On March 11th Cronin - who was represented by solicitor Diane Hallahan and barrister Meg Burke - waived analysis of his B sample and accepted the charge.

The decision is final in respect of the player and EPCR. However, World Rugby, Sport Ireland and Wada each have the right to appeal to the court of arbitration for sport in Lausanne, Switzerland.

“These past few months have been very trying for myself and my family and I am glad that this issue has been resolved so that I can focus fully on rugby when it resumes,” said Cronin in a statement released by Rugby Players Ireland. “I accept that this is a strict liability offence and that even though the medication taken was due to a very serious and unexpected dispensing error, it has taught me a very valuable lesson that I hope my fellow players and any other athletes can also learn from.

“I am confident that my friends, fellow players, the rugby media and rugby public will understand that I never acted with any intent nor in any manner to intentionally compromise the EPCR tournament.

“I have volunteered to participate in an educational forum to help raise awareness with other rugby union players so as to ensure that my experiences can be avoided by other athletes.”

The IRFU, having completed a separate “review of the matter,” concluded that the sanction imposed by EPCR is “sufficient in this case due to the strong mitigating circumstances.”

The union’s education programme intends to reflect “learnings” from this “exceptional case.”

Munster Rugby CEO Ian Flanagan said, “This has been an extremely challenging time for James and the province, and we are glad it has reached its conclusion. We have treated this matter with the utmost seriousness, and as always Munster Rugby and Irish Rugby are fully supportive of all Sporting Ireland, Wada and World Rugby anti-doping policies . . . we look forward to James’ return to action.”

The standard suspension for glucocorticoids is two years. Several Kenyan athletes have tested positive for the same drugs as Cronin, most recently marathon runner Vincent Yator who received a four year suspension after prednisone and prednisolone were found in his system last year.

Unlike Cronin, in 2015 Serena Williams provide a backdated therapeutic use exemption (TUE) for prednisolone.

Bundini Brown: The man who invented ‘float like a butterfly, sting like a bee’ 17:00
Griggs names 36-strong women’s squad 16:58
Shamrock Rovers to meet Cork in FAI Cup second round 15:41
GAA launches series of events to mark Bloody Sunday centenary 15:13
Cyrus Christie recalls racial abuse from a child at Ireland training 12:31
Here is your handy guide to sport on television this week