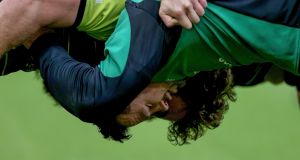 Cian Healy in a scrum during Ireland training ahead of the Autumn Nations Cup match against Wales. Photo: Dan Sheridan/Inpho

Kick-off: 7pm, Friday. Venue: Aviva Stadium. How to follow: The Irish Times liveblog will begin at 6.30pm. On TV: Live on RTE and Channel 4.

No history, no tradition, no supporters and no prize money, but opening night in this schedule-filling, hybrid by-product of the Six Nations and a normal November series offers these two sides a shot at redemption. The result will also go a long way toward determining their Autumn Nations Cup campaigns.

True, for Johnny Sexton et al the nagging feeling that they left a shot at the Six Nations title behind them in Paris a fortnight ago will linger. But Wales have even more to atone for after losing four Six Nations games in succession (and five in all) for the first time since they were whitewashed in 2002, an unthinkable scenario a year ago after they backed up a Grand Slam by reaching the World Cup semi-finals.

Then again, falls from Grand Slam highs in the ultra-competition Six Nations are not uncommon. Witness England, Ireland and Wales finishing fifth, third and fifth in the ensuing seasons.

Andy Farrell and Wayne Pivac have reacted in sharply contrasting fashions. Ireland should be revived but relatively untried after making seven changes in personnel and three positional. New combinations abound in all bar the second-row. Ronan Kelleher makes his first Test start in the frontrow, while Caelan Doris makes his second Test start at 8 and for the first time alongside Peter O’Mahony, although they have had minutes together.

Jamison Gibson-Park also makes his full test debut, albeit he’s familiar with Sexton. For all the midfield comings and goings, Robbie Henshaw and Chris Farrell are also starting a game together for the first time and, in the back three, James Lowe makes his introduction to international rugby.

Even the potentially world-class second-row pairing of James Ryan and Iain Henderson has time to make up for, having only started 11 games together. The bench is also fairly inexperienced which makes the inclusion of Conor Murray and Keith Earls look even more sensible.

For all of that, this is a potentially exciting, as well as interesting, Irish side. Despite fears to the contrary, the scrum held up well in Paris, but the lineout wobbled. The Welsh scrum poses a proper threat but, if the Irish set-piece holds, Kelleher, Henderson and Doris at 8 should inject some dynamic carrying. Likewise Farrell at centre while Lowe and Jacob Stockdale give left-footed options and X-factor.

They increase the possibility of tries, arguably at both ends, and not only are they prone to loose defensive moments, but there were systemic failures for all four French tries.

For their part, Wales started superbly in Paris three weeks ago and were a good deal more competitive than the scoreline suggests bearing in mind that Dan Biggar, untypically, lost his kicking radar.

They were then penalised off the park against Scotland at the breakdown and, after losing Biggar, were so devoid of ambition that Pivac admitted they went into their shells. Key men look ring rusty after lengthy lay-offs and they lacked ball carrying oomph.

Yet this is a vastly experienced team, as 13 of tonight’s matchday 23 featured in the Grand Slam coronation at the Principality Stadium with that 25-7 win, compared to nine of tonight’s Ireland squad.

Furthermore, seven of this squad are Test Lions, as opposed to three for Ireland. With 1,119 Test caps between them, including the Lions, the Welsh 23 has an average of 49 caps per player, as against 34 for Ireland. Yet they are not especially older, with an average age of 28 compared to Ireland’s 27-and-a-half.

Wales are also usually awkward customers for Ireland, with seven wins apiece and one draw in the last 15 meetings since 2010. As a further example, Sexton has faced Wales more often than any other opponents (14 times) in his 99-match Test career and only has a losing record against three countries – New Zealand, England and Wales.

To add to the intrigue of this most fiendishly unpredictable of all Six Nations rivalries, two debutant outhalves could be seeing out the endgame. The 26-year-old English-born Billy Burns, who has played for England under-18s and under-20s, qualifies for Ireland by dint of a paternal grandfather from Cork.

The 25-year-old Welsh-born Callum Sheedy, whose parents are Irish, represented Wales at under-16 and Ireland at under-19 and, having been educated at Millford before coming through the ranks at Bristol, could also have represented England through residency.

There may be no fans present but there will be a sizeable television audience bearing in mind Ireland’s games against Italy and France on Virgin Media TV drew average audiences of 541,000 and 850,000, with the latter closer to 1 million when including those who watched the Six Nations finale on iPlayer.

After succeeding two high achieving head coaches, arguably the best in each country’s history, both Farrell and Pivac could do with a win. Put another way, they could seriously do without a defeat. This Nations Cup may well be a footnote in history, but the stakes look almost deceptively high.

The bonus points system, for what it’s worth, will apply again in this competition, although in all likelihood three wins will guarantee a place in the ‘final’ and two wins a place in the third place playoff.

As both have subsequently to play England this looks like an eliminator of sorts with the losers of this game facing a decidedly uphill task to win the group.