Dan Leavy to start for Leinster against Edinburgh 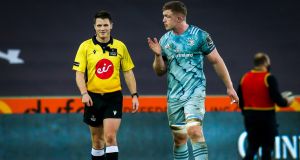 Dan Leavy will start his first game for Leinster having enjoyed a graduated return to rugby when coming on as a replacement in recent weeks. The Irish international, who was out for 18 months with a knee injury, is named at blindside flanker, joining Scott Penny and captain, Rhys Ruddock in the backrow.

There was further good news for Leo Cullen’s charges as Ryan Baird has recovered from an adductor muscle injury and is included on the bench; one that favours a 6-2 split with Hugh O’Sullivan and David Hawkshaw acting as backs cover. O’Sullivan can play scrumhalf, fullback and wing, while Hawkshaw is equally at home in the outhalf or centre roles.

There are a couple of enforced changes as Tommy O’Brien and Rory O’Loughlin picked up injuries in the victory over the Ospreys so Liam Turner and a fit again Ciaran Frawley form a midfield partnership. Harry Byrne has shaken off a dead leg. Devin Toner joins Scott Fardy in the secondrow while Ross Molony and Josh Murphy, both of whom have been excellent, drop to the bench.

Edinburgh, who have won their last two matches make one change from the side that beat Cardiff 18-0 last time out with Andrew Davidson returning in the secondrow. Head coach Richard Cockerill said: “We’ve won two in a row with back-to-back gritty performances and we’ve been really pleased with how this young squad have stepped up to the mark in recent weeks.

“We now face a massive test against an unbeaten Leinster side, so we’ve got to use that confidence gained in those wins over Scarlets and Cardiff and make sure we’re bold and decisive in everything that we do.”