Coach sees positives from Pro14 final defeat, describing it as an ‘invaluable experience’ 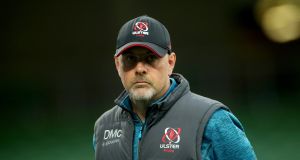 Ulster head coach Dan McFarland looks on during his side’s defeat to Leinster in the Pro14 final at the Aviva Stadium. Photograph: James Crombie/Inpho

Being contemporaries of this Leinster machine must be at least a little demoralising. For Ulster, the drought without a trophy goes back to 2006 and hence is even five years longer than it is for Munster. And the sense of déjà vu must be equally tiresome after another Pro14 campaign has ended with defeat by their bête noire. Or should that be bête bleu?

This was the eighth time in the last 11 seasons that Ulster’s ambitions and hopes have been ended in the knockout stages of either the Guinness Pro14 or the Heineken Champions Cup by Leinster.

They must be sick of the men in blue, yet they can’t afford to be and as Dan McFarland admitted: “We need to just keep improving.”

“It’s an invaluable experience,” he maintained of this final defeat. “James Hume had his best game of the season, I thought Tom O’Toole was really excellent. Those guys, they’re the green shoots in our organisation and we’ve another couple of guys coming through. I would hope that at the start of the next season, due to its nature, so dense in terms of games, that we’ll see some more coming through.”

There’s also little time to dwell, for next Sunday they face a daunting European quarter-final away to four-time champions Toulouse, where they will actually welcome a crowd of 5,000, even if it is comprised exclusively of home fans. If nothing else, Ulster are now match fit after this fourth game in four weeks.

“From the point of view that it was tough, definitely. It’s nicer to go into these games winning than it is losing. But that’s sport, unless you’re wearing blue, then you are going to lose some games. We’ve had a number of tough games so far so we can say we’re battle hardened, for sure.”

The reborn and rejuvenated French champions of 2018-19 were hit harder than most by the World Cup, hence their misleading position of seventh when the 2019-20 Top 14 was abandoned.

The 2020-21 Top 14 began a week ago, when Toulouse scored four tries to three away to Clermont in a 33-30 defeat despite having two players sent off by the 50th minute, and on Saturday they beat La Rochelle 39-23 at home, with their spring-heeled Springbok World Cup final try scorer Cheslin Kolbe scoring two of their three tries.

Somehow, McFarland, his staff and the players have to harness the sense of disappointment from this latest knockout setback.

“You harness it in the sense that the whole thing is a journey,” said the Ulster head coach. “Every day has to be a part of getting better and this obviously gives us a real marker. In the past when we’ve lost these games, we’ve gone away and ruthlessly reviewed them to take away what we need to take away. We’ve taken a lot from that.

“Next week, it’s tough, obviously. In eight days we play Toulouse who, I know they were eighth last year, but if you watch them, they’re one of the best teams in Europe. Size, speed, offload ability, they’ve got the best number nine in the world,” ventured McFarland of Antoine Dupont, and aside from Kiwis stating the claims of Aaron Smith, not many would disagree.

“Try and find a weakness in their game, it’s really difficult. It’s a challenge but it’s a motivation. Different opposition, different competition, an actual crowd – wow – that’s awesome even if it’s only 5,000 Toulouse fans. We’ll be motivated by that and we’ll look forward to that challenge.”