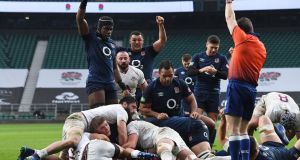 Jack Willis is determined to continue winning England caps so that he can truly celebrate the birth of his international career with friends and family at Twickenham.

With all Autumn Nations Cup matches taking place behind closed doors due to the coronavirus pandemic, Willis’s pleasing debut against Georgia last Saturday took place in front of empty stands.

“I had a FaceTime with my missus and parents afterwards. It was lovely to have a chat with them,” Willis said.

“It’s just very strange times doing it over FaceTime, but it doesn’t make it any less special. It was incredible to have the cap on my head and show them that with a smile on my face.

“It was a very strange experience not to have family and friends there but it’s given me extra motivation to work hard enough to have another opportunity one day and have them here.”

Willis’s first-half try was the highlight of an impressive first cap, but the all-action Wasps flanker has already set his sights on making the improvements needed to stay in contention.

Willis is operating in the most competitive position of the team and, having demonstrated against Georgia that a promising Test future lies ahead, he is unlikely to be present in the starting backrow for Ireland’s visit to Twickenham on Saturday.

Tom Curry and Sam Underhill are England’s first-choice flankers, with Ben Earl offering cover on the bench, and it is against this high-quality trio that a player described by Eddie Jones as “flipping tough” must prove himself.

“I’ve got to work incredibly hard to improve all areas of my game if I want to keep competing in this backrow. There’s some pretty special talent in that mix,” Willis said.

“For everyone in the team, if you don’t continue improving, then you are going to get left behind. So at the forefront of my mind is working hard, trying to improve and staying in that mix.

“I’d love another opportunity, it would be incredible. Everyone in this group would love an opportunity next week against Ireland.

“I have learned a lot being in camp over the last couple of weeks about what it takes to push yourself to the next level, and now it’s just about applying that week on week throughout a season.”

Ian Botham’s grandson James, meanwhile, has received a maiden call-up to Wales’s Autumn Nations Cup squad. The 22-year-old has been added to Wayne Pivac’s group for forthcoming games against Georgia and England, having previously trained with the senior players.

The Cardiff Blues flanker, who has represented Wales Under-20s, comes from a sporting family as not only his is grandfather one of the greatest cricketers ever to play for England, his father Liam also played professional rugby in both codes.

James Botham was born in the Welsh capital in 1998 when his dad was playing for Cardiff and is highly rated within the Wales set-up.

Johnny McNicholl has also been called up. The New Zealand-born utility player has won four caps for Wales and comes back into the group after a recent injury.

The Welsh Rugby Union confirmed in a statement on Monday evening: “Wales have called Johnny McNicholl and James Botham into their squad for the Autumn Nations Cup. McNicholl, who has been capped four times by Wales, made his debut in the 2020 Six Nations and has returned from injury to be available for selection.

“Former Wales U20 backrow Botham, who has previously trained with the squad receives his first official squad call-up.”

Wales, beaten 32-9 by Ireland on Friday, face Georgia in Llanelli on Saturday and then take on England seven days later.