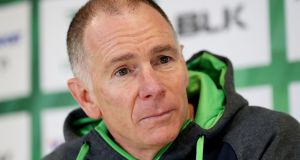 After a much-needed break for the Six Nations, Connacht welcome the return of several key players for the first of three games that could determine their seasonal hopes.

The games against Cardiff in the Sportsground on Friday evening, followed by away fixtures to Edinburgh and the Southern Kings, are being identified by coach Andy Friend as possible make-or-break for their seasonal ambition to reach the PRO14 quarter-finals.

To that end Ultan Dillane and Dave Heffernan have returned to Galway from Andy Farrell’s Six Nations squad, while prop Finlay Bealham, scrumhalf Kieran Marmion and Jack Carty are all available.

Sitting in fourth place in Conference B – nine points off leaders Edinburgh – Connacht are crucially just a single point above Friday’s in-conference rivals Cardiff and need a home win to maintain a push for the top.

“Destiny is in our hands. We know what we need to achieve and everything is around getting a home quarter-final.”

That ambition is more significant since Connacht exited Europe at the pool stages.

“We all have to deliver, not just the players, but all of us. We had a few specific goals, one was a home quarter-final in the PRO14 which is alive and kicking. Another was to qualify for quarter-finals of Europe. We missed that, so there is now pressure on us to make sure we do achieve, and with that pressure we step up to the mark.”

Connacht’s last win was two months ago against Gloucester in the Champions Cup, and since then Friend’s outfit has lost five games on the bounce, including three interprovincials and two European games.

“Not happy with that. We are none from five so we need to arrest that pretty damn quickly. We’ve had our issues, but that is rugby. We have two interprovincials left, Ulster and Munster, and they will become major targets for us.”

“We’ve probably had a worse run than we would have expected this year, but what is pleasing at the moment is we have numbers back on the training field, and we linked up with the Academy this week and we had 44 players out there.

“It is a learning for us as squad. We took it down to 41 this year because we were looking for more quality, but we know now we need more for next year.”

Some 20 players will be out of contract at the end of the season, while Friend has resigned himself to losing openside Colby Fainga’a, who is expected to complete a move to Lyon.

“That is more than likely going to happen,” says Friend. “He has been immense in the 18 months he has been here. As all foreign players do, they are about making their club better and he has certainly done that.

“Whenever you lose a player of that ability, it’s a large hole to fill, but we are in the process of trying to fill it at the moment. Sometimes you do lose players you would not ideally have lost, like Colby, and last year CK [Cian Kelleher]. We didn’t want to lose CK, but it happens. However, we are very close to [signing] three or four players in the coming period of time.”

1 ‘Manchester United are lucky to have you’: Klopp responds to Donegal schoolboy’s letter
2 Liam Toland: Larmour can distract England while others flourish
3 England name Jonathan Joseph on the left wing
4 This month a decade ago, football and Dublin changed course
5 Six Nations: Ireland v England all you need to know guide
Real news has value SUBSCRIBE