“I’ll do the best job I can while I’m in the job and take it one game at a time,” he said 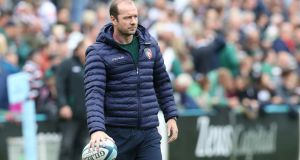 Leicester Tigers’ Coach Geordan Murphy during the warm-up prior to the Gallagher Premiership Rugby match between Leicester Tigers and Newcastle Falcons at Welford Road. Photo: Stephen White/CameraSport via Getty Images

Leicester interim head coach Geordan Murphy praised his players as they secured their first win of the season in an up and down encounter with Newcastle at Welford Road.

Five first-half tries proved enough for the 49-33 victory as Murphy got off to the perfect start in his new temporary role after stepping in for the sacked Matt O’Connor earlier in the week.

George Ford played a pivotal role for the Tigers scoring 29 points including the opening try inside two minutes. Jonny May touched down twice, with Manu Tuilagi and Adam Thompstone also on the scoresheet.

Falcons hit back with five tries of their own - two of which came from Vereniki Goneva - but they ultimately paid the price for a sluggish first-half.

“It was a win so I’m pleased with that,” said former full-back Murphy. “We were sloppy at times, but we had a really good start and that put us in control. Overall, I’m pleased but we have plenty to work on.

“The senior players had big games, but we weren’t the finished article today. It’s been a tough week, and it’s bound to be after losing the head coach with an interim coming in tweaking a few things, but the players stood up and led really well.

“The support they’ve given me in a tough week has been world class.”

Murphy revealed 64 people applied for the head coach position at Leicester after O’Connor’s sacking, but says that does not alter his stance on wanting the top job.

He said: “I heard that 64 people applied for the job on the first day. It’s not a concern of mine. I care about the club and if they can find someone who can do a fantastic job then I’ll support them to the end of the season.

“I’ll do best job I can while I’m in the job and take it one game at a time.”