Andy Friend’s side bounce back from defeat to Scarlets 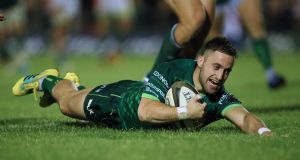 Connacht were in impressive form to open their home account in this season’s Pro14 with a comfortable six-try victory over Benetton Treviso.

On a rare dry and windless evening at the Galway Sportsground with no remnants of Hurricane Lorenzo, Andy Friend’s side took full advantage of the Italian side missing 16 internationals on World Cup duty. The home side was 22-0 up at half-time, and within minutes of the restart, on-fire scrumhalf and man of the match Caolin Blade had grabbed his second and Connacht’s fourth to wrap up the bonus point.

Connacht had drawn first blood when outhalf Conor Fitzgerald posted a penalty on five minutes, and within five minutes centre Kyle Godwin had claimed the first of Connacht’s try tally after spotting a gap in the defence and fending off a last-ditched tackle from fullback Luca Sperandio

In control, Connacht posted two more tries within the next six minutes. Blade caught the cover napping when he cheekily dummied through from the blindside of a scrum 10 metres out, before Connacht reaped the reward for a classic lineout and drive from a penalty to touch with Tom McCartney bagging try number three. Outhalf Fitzgerald added both conversions to put Connacht into a 22-0 lead after 24 minutes.

However Tom McCartney added his second after a super break by centre Peter Robb, while replacement Kieran Marmion also added his name the tally.