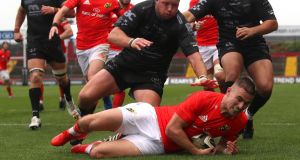 Munster’s Shane Daly touches down for a try in the Guinness Pro 14 game against the Dragons at Thomond Park. Photograph: Tommy Dickson/Inpho

Munster got their Guinness Pro 14 campaign off to an encouraging start with a deserved bonus-point win in difficult conditions at Thomond Park.

Dragons only offered token resistance but Munster, with 12 players on duty in Japan, did all that was required of them to fashion a five tries to nil win in front of a crowd of just under 6,000.

Munster led 22-9 at the break, seizing control after a sluggish opening and they turned the screw when Dragons were down to 10 men after hooker Richard Hibbard was binned for a high tackle on Jack O’Donoghue.

Munster, helped by a try under the posts from number eight Arno Botha after a drive from a penalty to the left corner, led by 10-6 when Hibbard was yellow-carded, but they scored a brace of tries with the extra man.

O’Donoghue was at the end of another good drive to score under the posts and then five minutes from the break promising winger Shane Daly gathered his own chip to score in the left corner.

A third penalty from Sam Davies cut the gap to 22-9 at the interval but JJ Hanrahan cancelled that within two minutes of the restart.

Munster held Dragons scoreless while Mike Haley was in the bin for a high tackle but they regrouped and secured the bonus point when a break from Rory Scannell created an opening which was finished under the posts by Tyler Bleyendaal.

And Johann van Graan’s men finished in style when another drive was finish by Academy hooker Diarmuid Barron, with Hanrahan landing the conversion with his sixth successful kick from seven attempts.