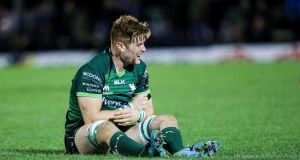 Connacht’s Sean O’Brien picked up an injury during his province’s significant defeat to Leinster at the Sportsground. Photograph: Gary Carr/Inpho

Connacht are anxiously waiting for positive news on the injury front ahead of their return to Champions Cup rugby, while coming to terms with their “reality check” after a hammering at the hands of Leinster on Friday night.

Connacht’s frontrow took another hit with Finlay Bealham on the field for only three minutes before suffering an ankle injury, while secondrow cover Sean O’Brien possibly dislocated his shoulder within minutes of his return after months out of action.

Already without locks Quinn Roux, Gavin Thornbury and Ultan Dillane, who is being monitored “day by day” over back spasms, it leaves Connacht with a weakened front five ahead of Montpellier’s opening day European fixture next Sunday.

Head coach Andy Friend says there is no time to feel sorry for themselves after the 42-11 loss at the Sportsground.

“We will have to get over it pretty quickly because you have to in this competition. We’ve been pleased with the wins we have had, but were are in the big boys’ league now and Leinster is one one of the big boys, and it showed us that what we have been producing is not going to be good enough for Champions Cup or to continue to try to win a Pro14.

“It has happened in round six of the Pro14, so there is lots of room for us to take the learnings out of that and grow, and that’s what we intend to do.”

Friend expects Montpellier will be similarly physical as Leinster were, with four of their six scored by forwards.

“Montpellier are going to be big and physical, so we we need to get a game plan that is going to try to avoid an arm wrestle. They are an enormous pack with a lot of fire power there, and they will want to have an arm wrestle, specially after seeing that game [against Leinster]. If it gets into an arm wrestle, we will have our work cut out; if we can move them around and play a more open brand and get them moving, it will probably be our best chance.”

In contrast Leinster’s Leo Cullen has only positive selection headaches ahead of their opening Champions Cup fixture against Benetton on Saturday, based on strong performances from his squad.

“Our ability to win the contact on both sides of the ball gave us a lot of momentum in the game. We didn’t do anything particularly flashy, but good carries, very accurate around the ruck, and the forwards gave us . . . good position. So for the most part we were in that area of the field, and it was good to see the frontrow getting over with four tries.

“Overall it was good, so it gives us positive momentum going into Europe – totally different challenge – and we have plenty to ponder as a lot of guys went well individually, and a positive collective as well.”

Man of the match, openside Will Connors, was one player to put his hand up, said Cullen.

“I though Will Connors led the way. He was exceptional in getting off the line, making some great chop tackles, and a number of other guys stood up, so it’s a good position in which to find ourselves after six rounds in the league. But we are already turning our attention to Europe, and there will be some tough calls for us trying to get the right blend for what the challenge is next week.”