The Springboks have overpowered England and won the Rugby World Cup for a third time, thereby joining the All Blacks as the most prolific World Cup winners of all time. Video: Reuters 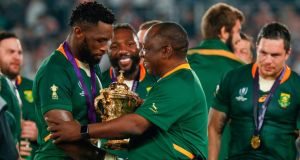 And that’s a wrap. Just over seven weeks since it began with Japan’s 30-10 win against Russia on September 20th, the 2019 Rugby World Cup has come to an end.

And it’s South Africa whose name has been engraved on the Webb Ellis Cup for a third time, following their comprehensive 32-12 victory over England on Saturday.

Rassie Erasmus’s Springboks were dominant throughout the final in Yokohama, saving their best performance of the tournament until the final weekend, never once trailing and pulling clear in the final quarter.

For Eddie Jones’s side, they peaked in the semi-finals. Their 19-7 win over the All Blacks was the best display of the World Cup, but they couldn’t hit the same heights when it really mattered.

Ultimately, South Africa might not have been the best side in the competition, but they are the most deserving winners, and Siya Kolisi lifting the trophy will become one of rugby’s most enduring and iconic images.

And predictably, the Sprinbgoks victory has been very well received by the South African press, who have paid tribute to Erasmus and his history-making players.

Indeed, in TimesLive.co.za - the website of The Times South Africa - Liam Del Carme writes: “Coach Rassie Erasmus’s masterplan marvellously came to fruition as his team, with cool composure, stuck to a script they had so religiously followed all tournament.

“Their forwards pummelled England in particular in the scrums, while the Springboks’ belligerence in defence allowed England very little time and space. The Boks pulled Red Rose petals until there was nothing left to pluck.”

And as well as praising Erasmus, he also hails Kolisi, South Africa’s first ever black captain and their third World Cup winning skipper.

“The win is testament to coach Erasmus’s strategic planning and powers of organisation. He initiated a turnaround strategy for the national team that was in the doldrums after he became SA Rugby’s director of rugby almost two years ago.

“Captain Siya Kolisi should take a bow too. His journey to becoming a World cup-winning captain is the stuff of legend, while Handre Pollard showed nerves of steel throughout.”

Saturday’s victory completes a remarkable resurgence for the Springboks, who become the first team to win the Rugby Championship/Tri-Nations and the World Cup in the same year.

They also become the first team to lift the Webb Ellis Cup having lost a match during the tournament, following their 23-13 defeat to the All Blacks on the opening weekend.

The same All Blacks side who comfortably beat South Africa were subsequently well beaten by England - and in the New Zealand Herald, Liam Napier writes how this is proof of sport’s fickle nature.

“Last week England played their final. That much we now know to be true. England rose to the upper echelons of their capabilities and physically bullied the All Blacks out of the World Cup.

“Tonight they could not get back there. Not even close. Psychologically, maybe, they were guilty of getting one step ahead. Only they will know for sure.”

South Africa have now matched the All Blacks’ three World Cup titles, and Napier has suggested they were well worthy of their victory.

He writes: “After losing to the All Blacks in their opening match and scraping past Wales in the semifinal, the Boks were rank outsiders to roll England. Once again, though, they proved that underdog position is exactly where they thrive.

“What a special moment this is for their passionate country of 52 million and their inspirational leader Siya Kolisi. What a way, indeed, for Kolisi to celebrate his 50th match with his father, Fezakele, in the Yokohama stands on his first trip abroad.”

Indeed, the Kiwi press as a whole seem to be effusive in their praise of the Springboks, although it hasn’t quite taken the edge off New Zealand’s defeat last weekend.

In Stuff.Co.NZ, Richard Knowler writes: “If you love rugby you could have jabbed an index finger at the action, and ticked off the reasons why this game is so great. This was an exhibition of tough men slugging it out, and doing all they could to keep their dignity intact as they knees sagged.

“It’s of no consolation to New Zealanders to know that their team beat South Africa 23-13 in the first pool game of the tournament. Because the old foe delivered when it mattered. The All Blacks couldn’t.

“At least the World Cup stays in the southern hemisphere.The first test between the All Blacks and the Springboks in the Rugby Championship next year will be something to look forward to.”

And what about England? In a World Cup which saw a number of the globe’s elite coaches - Warren Gatland, Steve Hansen, Joe Schmidt - say their goodbyes, question marks now hang over the future of Eddie Jones.

During the week, Gatland had riled Jones by suggesting England might struggle to repeat their heroics of last weekend in the final.

And in the Independent (UK), Jonathan Liew suggests that is exactly what happened: “Was complacency a factor here? I don’t think so.

“More that, called upon to play a completely different sort of game to the one required last Saturday against the All Blacks, England too often found themselves in the embrace of the unfamiliar, against a team whose own patterns and traits had been drilled and conditioned and hard-wired over weeks and months.

“The strategy might have been there, but the muscle memory wasn’t. When it came to the crunch moments under the highest pressure, South Africa knew their game better than England knew theirs.”

And writing in the Guardian, Robert Kitson suggests that despite England’s favouritism heading into the final, perhaps we should have seen this one coming.

“Eddie Jones’s side could have no complaints, even if the final margin was a touch lopsided. Those predicting a comfortable English win were guilty of overlooking South Africa’s proud World Cup heritage.

“They had never previously fallen at the final hurdle or even conceded a try in either of their two previous finals, though neither triumph involved them registering a try themselves.”