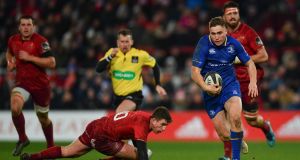 Munster were threatening an unlikely comeback, having cut Leinster’s 27-5 half-time deficit to eight points in this eight-try festive feast which yielded try-scoring bonus points for both teams, until Larmour fielded a high ball from Ian Keatley in the 69th minute.

Blessed with a truly rare mix of balance, footwork and pace, Larmour stepped Sam Arnold and burnt Rory Scannell to accelerate clear, and then stepped Keatley before withstanding a covering tackle from Simon Zebo, who showed a fair turn of foot himself, to score.

“That’s exactly what I told him to do before the game so I’m glad he obliged,” said Cullen, who then laughed when revealing: “Actually we were laughing about it [after the game] because I said to him ‘just go out and beat a load of defenders’ and that’s exactly what he did. So yeah, it was an amazing try.

“He’s like a bundle of energy every day he comes in and he’s just incredibly competitive, and yeah, he did well, it’s fair to say. That’s probably the biggest understatement of all time.”

This was Larmour’s fourth try in 11 games, just six of which have been from the start, and, in front of an increased capacity of 26,267 spectators, this was also his first interprovincial start.

Recalling his superb finish away to Ulster at the end of October, Cullen was asked if Larmour was creating his personal portfolio for try of the season.

A try of the season contender from Jordan Lamour?!

Leinster were full of energy all over the pitch, with a host of talented players straining at the leash, in what was yet another demonstration of their unrivalled squad depth. What Cullen said reflected the work that goes into their sub-Academy and Academy players, “so when they make the step up, it’s easier on them”.

“It’s something that we have worked very, very hard on, the work that goes into the players in schools and clubs before they even come in the door. Every year they become more ready and better prepped so just trying to keep those connections strong is really important for us. Every club has a slightly different model but that’s a particularly important part of the model that we try to run.”

Leinster’s fifth win in a row in all competitions also nicely sets up their home derbies against Connacht and Ulster, with Cullen to again rotate his players.

“Connacht have had the extra three days as well, so you’re trying to mix and match all the time, with three games in 11 days that is, and hopefully that keeps the squad in reasonably good health as well going into the final two European games.”

“Hopefully we’ll get a big crowd in the RDS on New Year’s Day and then we’re back there the following Saturday against Ulster. The game against Connacht obviously is important. When you play against a team in your Conference it’s almost a little more [important] again on top of that. They’re two huge games for us.

“Connacht will be difficult because of them having extra prep time going into the game and the fact that they’re in a good vein of form as well. I thought they looked very, very strong against Ulster – an incredibly comprehensive win for them – and [they’re] a team we’ve struggled against in the past as well. It’s important that we just prepare well given the time constraints that we have.”

His Munster counterpart van Graan accepted that the home side’s first-half performance “was not good enough at all” and admitted to feeling “very frustrated” at half-time.

“We planned well for this game, our preparation in training went well. The players came in really refreshed this morning and we were up for this game. No excuses from our side so obviously we were frustrated.

“One or two things were said. We needed to adjust our mindset and adjust our plan and we did so. Unfortunately, if this game went 10 minutes longer we might have scored one or two more tries at the end. All credit to Leinster. This is an 80-minute game and they scored 27 points in the first half, we scored only five. We came back in the second half, 19-7, but we were just too far behind.”

Van Graan also accepted that Leinster “are definitely the side to beat” in the Pro14.

“We said in the changing room we know now where we are, ten points behind them in this one and we were second short in the previous game. We need to adjust. We might see them late in the competition again but we have got a lot of hard work in front of us to get to their level.”

He also knew of Larmour’s talent.

“He looks like he’s been playing for years,” said van Graan, and as for that try he added: “We could have worked on our kick, but sometimes in this game you’ve just got to say ‘wow’. Now I sat there and said those feet and that decision making, sometimes we forget that there is an opposition team as well. So well done for scoring that try, I thought he was brilliant in the whole game. That’s pretty special and the big moments went Leinster’s way tonight. He had a big part to play in it.”