For how long can rugby’s injury crisis be allowed to continue?

Is a 13-a-side game or less substitutions in matches the solution to multiple bad injuries? 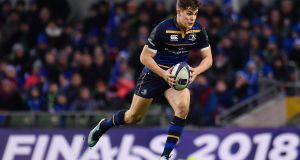 Leinster’s Garry Ringrose is among those to have picked up a lengthy injury this season. Photo: Ramsey Cardy/Sportsfile via Getty Images

Professional rugby is reaching breaking point. And break is the word with each weekend bringing more injury problems. Wasps lost three more players in victory over La Rochelle last weekend: Elliot Daly, Nathan Hughes and Jimmy Gopperth will be out of action for weeks or months, not days.

To watch Leicester’s Champions Cup match against Munster on Sunday was more evidence of why the casualty rate owes more to war than sport. It was unrelenting in its ferocity, players thundering into each other from the start with space so elusive it had to be forced. It had the intensity of an international and the Irish province had even more Test players than the Tigers.

It was the same earlier in the day when Clermont Auvergne faced Saracens, whose lock George Kruis reflected on another brutal encounter. “They have some big boys and they kept on coming,” he said. If it makes for entertainment, and you can only admire the commitment shown by players who defy strains, aches and pain to keep piling into the fray, rugby union has moved some way from the game it once was.

It was not just in the days of black and white television that the game was essentially two-toned: forwards against forwards, largely in the set pieces with breakdowns around one quarter of today’s number, and backs against backs. All the forwards contested rucks, many using them as a rest period, and there was no fanning out in a line behind.

Law changes and tweaks have been made in recent years with the aim of encouraging space on a cluttered pitch that has not changed its dimensions over the years. Each one tends to be counteracted by defence coaches, who have the time to work out ways of sabotaging each initiative so it almost has the opposite effect of what was intended.

The change of emphasis at the breakdown, where it has become harder to win legitimate turnovers after a tackle, has led to teams not bothering to contest unless a ball-carrier is isolated but organise defenders in a line to see off the next phase of the attack. As ball-in-play time has increased, so has the number of tackles and it is in the collision area where the majority of injuries occur.

One solution is a return to rucking as it used to be, although that is highly unlikely on safety grounds. Players being rucked off the ball when it is on the floor would force an attacking team to commit greater numbers to the breakdown and so reduce the trail in the defensive line, but trampling, even in a forward rather than an up-and-down motion, would lead to an outcry.

It is an issue that is concerning World Rugby which next March will consider proposals, including one to reduce the number of substitutions to prevent teams from making mass replacements in the final 20 minutes, the point at which players used to tire.

“Rugby used to be a game for all shapes and sizes and we are moving away from that,” said the Welsh Rugby Union chairman, Gareth Davies, the former Wales and Lions’ fly-half who is on World Rugby’s council. “As a fly-half, part of my job was to outfox a wing forward who spent the game chasing you but now after 50-odd minutes a whole new team come on.

“I am not sure what law changes can achieve. There is an experimental one being conducted now in the tackle but the only way I can see it is guys having to play for the full 80 minutes. That would force them to shed a few stone: players are physical specimens now and if it carries on they will get even bigger and stronger.

“It will certainly not get any better. When I played, no one tore biceps of hamstrings off the bone. No one had stinger injuries and what is happening is a player’s muscular set-up is not natural while your ligaments and bone structure remain the same. It is the load that causes the problems.

“Players are bigger than their bodies are designed for them to be and a lot of the injuries are because of that, not just because of the physical demands of the game. If players have to run for 80 minutes, they will have to become lighter and get closer to their natural body weight and there is a chance of opening up the game. It is worth looking at because many are now conditioned to play for only 50 minutes.”

Another option is to reduce the number of players on the field. Going down to 13-a side would mean union resembling league in more ways than one and would be considered heretical but the vast majority of clubs constantly have injury lists in double figures. Sam Warburton, Billy Vunipola, Taulupe Faletau, Ben Te’o, Garry Ringrose, Willem Nel, Wesley Fofana, Ross Moriarty and Nathan Hughes have been among the long-term casualties this year while the Worcester fly-half Tom Heathcote is out until April with concussion. Something needs to be done to protect players from themselves.

“Going to 13 would fundamentally change the game,” Davies said. “There is no easy answer. If you tried to force teams to commit more players to the breakdown through a law change to create more space behind, how would you police it? A game would last for hours. Whatever you do, coaches will find a way around it.” – Guardian service