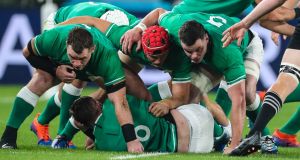 The Barrett clan spent 15 months living in Meath. They played Gaelic football for St Brigid’s while the father, who promised he would “breed All Blacks,” managed a local farm in Oldcastle. “That was all that was on offer in Ballinacree and it was a football year,” said Kevin Barrett.

Beauden was eight, Scott five, Jordie only two. 1999 certainly was a football year, it being the last time Sam Maguire wintered in the Royal County. Lens happened that October, still the worst Rugby World Cup night of them all.

What is more apparent than ever before is if the IRFU ever hope to live with the All Blacks of this sport then they must rip a leaf out of the AFL book of recruitment and enhance the head-hunting of the GAA’s underage talent.

Certainly more than the softly, softly approach currently employed. Take Conor Nash. The biggest loss to Irish rugby is the 21-year-old former medical student. At 6”6’ and a lean 92kg, Nash should be in Japan. The former fullback should be a household name by now.

Instead he’s in the Melbourne suburb of Hawthorn. Meath GAA lamented his loss to the Leinster rugby academy until the Hawks swooped in October 2016. Currently, there are 11 Irish athletes contracted to Aussie Rules clubs.

Joe Canning came to Tokyo, photographed walking into the Ajinomoto stadium behind Britsh Open champion Shane Lowry, to witness these All Blacks in the flesh. Once whispered of as a brilliant outhalf for Ballinasloe under-18s, Connacht and Munster were circling for the best hurler of his generation until the older brothers and Portumna mentors got wind.

Conor Murray is from Patrickswell. A hurling village. Go find Tadhg Furlong soloing and bouncing past young lads on YouTube.

“We’re under no illusions that genetically as a country we don’t have that many freaks,” said Rory Best when Kobe beef was still on the menu.

The “freaks” can be found inside this island’s most fiercely protected strongholds, Kilkenny hurling and Kerry football, who periodically gift rugby delicious crumbs like Willie Duggan or Mick Galwey. Cork possesses thousands of gifted athletes who never get anywhere near an oval ball. The Ó hAilpín brothers from Fiji were just as athletic as Sevu Reece. Seán Óg still works in the bank. Setanta settled in Sydney.

What’s never been so obvious is if the Ireland team’s bulk supplier continues to be two fee-paying schools separated by the Rock road in south county Dublin, then the Fields of Athenry being sung with gusto during the haka will remain the high water mark for Irish rugby at World Cups, because the balance of power will never change.

There has never been enough James Ryans and Paul O’Connells together in the same team. That’s always been the problem. Maybe that is about to change. The coming generation of professionals might produce a good enough spread of athletes.

“I think [Irish rugby] can get to that level,” said Ryan, the 23-year-old natural born leader. “Joe has set standards that are different now than before he took over.”

Maybe Schmidt has lit the flame.

“I hope so,” Ryan replied. “We hadn’t beaten New Zealand. We’ve done that. Or won a Grand Slam in a long time. We did that.”

New Zealand replace greatness with greatness. Devin Toner filled the O’Connell gap until Ryan was ready. If you want to find a line of Jack Goodhues or Barrett brothers then scout the Laois juvenile football scene. Roscommon has plenty more Jack Cartys.

Otherwise, forget about living with any generation of All Blacks.

“The Irish got their songs,” said Steve Hansen. “It was no different than playing in Dublin. If you do things right then you can control the crowd. If you let them in, the crowd become part of the problem.

Ryan is adamant he is learning. He craves knowledge from experience. That’s perhaps why he spoke to the written media when senior players refused to walk the line. What is being done beneath the surface to avoid the next World Cup choke?

Plenty. Ryan’s generation are flooding the provincial squads. Caelan Doris, Ryan Baird, Keynan Knox and Craig Casey are motoring through the system. This World Cup did not fracture against the All Blacks. Failure began on St Patrick’s weekend, it was evident for all to see in Twickenham and then Shizuoka. Ireland never recovered from the stifling heat of The Ecopa.

“It’s as much about coming down the hill as it is about climbing back up,” said Gordon D’Arcy of Ireland’s failure to re-scale the peak of beating New Zealand in 2018.

The players’ reaction to Schmidt announcing his departure had the coach describing them as “only human beings,” after being ruptured by England last February. It was a phrase the 54-year-old repeated on Saturday night.

Like Eddie O’Sullivan in 2007, Schmidt ignored disappearing form and stuck to the reliables. They failed to deliver for him. In stark contrast, the outgoing Hansen rebuilt the All Blacks despite losing their greatest ever midfield and backrow combinations. Only Kieran Read remains. He was peerless on Saturday in Tokyo. They also reinvented the way outhalves operate by selecting two of them.

Not many areas in Ireland can remain untouched by the only professional team sport that allows its players to live here on a very good salary. Trevor Brennans and Sean O’Briens should no longer be outliers. Schmidt knew the “barefoot four-years-olds in Te Aroha” playing touch rugby are replicated by hurlers pucking about every day from Dalkey to Tullaroan.

Come 2023 the current All Blacks will be at their peak while Rassie Erasmus will have a full World Cup cycle at the Springbok helm. Bernard Laporte is also expected to funnel the double under-20 World Cup winning sides into the senior ranks. He may even figure a way to appoint one of the great foreign coaches soon to be on the market.

England will reach the zenith of the Itoje and Farrell era. It’s a national sport in Wales. It’s catching on in Japan. The Ryan generation – ably supported by Ringrose, Furlong, Andrew Porter, Joey Carbery, Jordan Larmour and Dan Leavy – should guarantee a return to the heights of 2018. And, eventually, with some luck, reach a World Cup semi-final, but history tells us anything more seems delusional.

Ryan doesn’t except such a reality, nor should he, but the Ireland team under Andy Farrell will never be permitted to place anything but full focus on winning the Six Nations as a packed Aviva stadium remains the IRFU’s primary source of income.

So, more talent is needed from untapped genetic pools. Hurlers. It won’t be solved before 2023 but, clearly, if the GAA can cope with AFL cherry picking, they shouldn’t be bothered by the IRFU ramping up their recruitment of teenagers.

It’s the only way to heed Schmidt’s warning after witnessing last month’s “heavyweight” contest between South Africa and New Zealand.

And so it proved. Again.