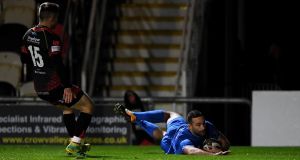 Leinster secured their ninth win from 10 Pro14 games this season, and their eighth in successio,by hammering the Dragons 59-10.

A youthful Leinster were 14-0 up before the Dragons could blink. A neat Ross Byrne cross-kick to the left corner gave Kearney a simple catch and fall try in the corner.

Minutes later, Penny was at the bottom of a ruck that crossed the home line but a try was ruled out.

Dragons lock Lewis Evans was sin-binned, though, during that attack.

Penny made up for his miss as he drove over from an attacking line-out. Ross Byrne added the extras to both tries.

Tovey put the Dragons on the board with a 25 metre penalty but they were defending more than attacking as the Irish province dominated possession and pressed again.

They added a third try as scrumhalf Jamison Gibson-Park sent a superb pass wide for Fardy to rumble in.

The Dragons first try chance came on 35 minutes when flanker Harri Keddie’s try was held up on the line by the visiting defence.

Other scoring opportunities were also wasted as the home region turned ball over before half-time arrived.

But Leinster exploited the wide area again straight after the restart as the Ross Byrne-Kearney combination created a mirror image of the winger’s first try and gave them a bonus point.

The Dragons, who had brought on Welsh internationals Leon Brown and Cory Hill to the front five at half-time, rallied and a neat move involving Keddie and prop Ryan Bevington sent Williams sprinting over. Tovey converted.

From then, though, Leinster dominated. A try was ruled out for a knock-on but Doris exploited more weak tackling for a try near the posts, while, just after the hour, Keenan ran through a midfield gap from 10 metres out to score near the posts. Ross Byrne converted again as the Dragons fell apart.

Three more tries, from Keenan, Bryan Byrne and O’Brien, one converted by Ross Byrne and one from Frawley, took Leinster to 52-10, the same score that they beat the Dragons by in Dublin on September 15.

O’Brien rounded off the match with his second, converted by Frawley, meaning Leinster have now scored 111 points against the Dragons in their two league meetings this season.