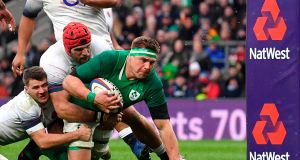 Ireland’s number eight CJ Stander goes to ground the ball at the base of the post during Ireland’s Six Nations win over England at Twickenham. Photo: Ben Stansall/Getty Images

You have cast your votes and the results are in for The Irish Times Readers 2018 Six Nations Awards.

Coming in with a resounding 58 per cent of the vote for Player of the Tournament is Ireland’s Conor Murray.

Murray is largely considered one of the best number 9s in the world and his partner Johnny Sexton was second in the voting for best player with 33 per cent.

As Gerry Thornley writes: “Murray was again at the hub of Ireland’s game with his zippy passing, energy to every breakdown and running game. His kicking is a huge part of Ireland’s almost flawless exit strategy.”

Onto Try of the Tournament and it seems that CJ Stander’s heroics from last Saturday at Twickenham are still fresh in the memory, garnering 58 per cent of the vote.

Sean Maitland’s effort for Scotland against England was a distant second with 15 per cent.

The movement by Sexton, the pass from Aki, that pass from Furlong and Stander’s driving power to reach the base of the post despite being tackled all came together to form the best try of the championship.

Finally, onto Match of the Tournament. This one was no surprise as Ireland’s Grand Slam-winning 24-15 win over England last Saturday was voted as the best encounter of the tourmanent, although Scotland’s Calcutta Cup win over Eddie Jones’s men was a not too distant second.

Ireland’s London win took 38 per cent of the vote while Scotland’s shock picked up 31 per cent.

Player of the Tournament

Try of the Tournament

Match of the Tournament