Seymour and Gray back to bolster experienced Scotland 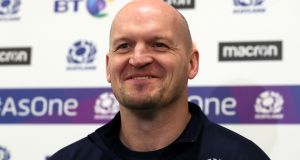 Scotland wing Tommy Seymour has recovered from a bad back and there is a place on the bench for long-term absentee Richie Gray as coach Gregor Townsend made five changes to his team to face Italy in their Six Nations finale in Rome on Saturday.

Seymour missed the 28-8 loss to Ireland last weekend having been injured in the momentous victory over England a fortnight before and now forms part of the most experienced squad Townsend has managed to select in his 10 months in charge.

The wing’s return to the team announced on Wednesday means Blair Kinghorn drops to the bench while centre Nick Grigg makes his first Six Nations start in place of Pete Horne, who is also among the replacements in the only other change to the backline.

The shuffling of the pack sees hooker Fraser Brown, prop WP Nel and lock Tim Swinson all promoted from the bench in place of Stuart McInally, Simon Berghan and Grant Gilchrist.

Richie Gray and Zander Fagerson feature among the replacements for the first time in the campaign, having recovered from their respective calf and foot ailments.

Experienced lock Gray, who has 65 test caps, will hope for a first appearance in a Scotland shirt in 12 months with his previous test against England in March last year.

“We’ve had a deeper look at the Ireland game, where we performed well in areas that will have to be better this weekend,” Townsend said in a Scottish Rugby media release.

“There were a number of positives in how we took the game to Ireland in attack and defence but this didn’t lead to us scoring enough points to win the game.

“We’ve been pleased with how the players have responded to last week’s disappointment, with the energy they have brought to training and a determination to improve our performance in our final match in this year’s Six Nations.

“Playing Italy will be a very tough game - it always has been for any Scotland side. We are ready for the challenge and have an experienced group of players working hard to finish our campaign with a positive performance and result.”

Ireland have already been crowned Six Nations champions this year, but Scotland could finish second if results go their way.