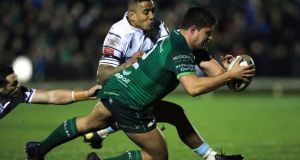 Connacht hooker Dave Heffernan scores a try despite the attempts of Rey Lee-Lo of Cardiff Blues during the Guinness Pro 14 game at The Sportsground. Photograph: James Crombie/Inpho

Connacht arrested a five-game losing run and marked their return to the Galway Sportsground with a key bonus-point winning display to keep their Pro 14 playoff hopes alive on Saturday night.

In creating some distance between themselves and Cardiff, they also kept their in-conference opponents scoreless – their first time achieving that rare feat since 2010.

Although Storm Dennis took a breather, the weather still played its part. But it was Connacht outhalf Jack Carty who took control, continually sending the ball deep into the opponents’ 22 to give his side the front foot in the opening 40 minutes.

By the 20th minute, possession stats were overwhelmingly one-sided. Although Cardiff had secured four turnovers, thanks in the main to Ollie Robinson’s endeavour, Connacht had made 120 metres – Tiernan O’Halloran a key contributor. Thus when hooker and man-of-the-match Dave Heffernan, who did his Ireland hopes no harm, pounced for the opening try after Gavin Thornbury and Ultan Dillane’s dual-disruption of a Cardiff lineout, it was a deserved reward for Connacht’s early dominance, which also included a Carty penalty.

Cardiff’s solid breakdown and scrum were never enough in a performance coach John Mulvihill described as “pretty embarrassing”, being “nilled for the first time in two years”. In contrast Connacht’s greater appetite, enterprise in attack and superb defence prevailed following a run of five defeats.

“We definitely needed that,” admitted Connacht coach Andy Friend. “We’ve had a really tough period, but I felt like we had got out of it with the performance against Toulouse – although a bit piecemeal – and Montpellier was better, but they were not wins. So to turn that into a winning performance, we are on track again, which is good.”

Connacht’s disruption of Cardiff’s lineout continued to provide Friend’s side with an attacking platform – a “telling point of the game” he admitted.

“Cardiff were in good positions on a view occasions, but just couldn’t win the ball. We scored our first try from a lineout turnover, and it definitely frustrated them, and that gives our kickers a real belief that we can keep turning them.

“I am pretty sure two or three tries came off their turnovers, so our pressure got us the football, and we were able to react to that, and benefit.”

It certainly provided the platform for the second try before centre Peter Robb pounced from Carty’s neat chip to the corner for a 15-0 half-time lead.

The impetus was all with Connacht, who did leave scores behind them, and that, along with his side’s concession at the breakdown, is an area Friend says will need to be sorted. However, two second-half tries – a John Porch effort, after a superb dash from Denis Buckley – and a try to the hard-working Kyle Godwin in the 58th minute, sent the Connacht supporters into song.

With several key players having returned from the attritional 13-week block, and having “snapped off a five-game losing streak which nobody wants to go through”, Connacht are in better health as they head to Edinburgh, leaders of Conference B.

“We will head to Edinburgh with confidence. When you are not winning games, you ask a lot of questions, and we did ask questions in that interprovincial block. Certainly the Ulster and Leinster games were our two lowest points, but I honestly felt we were building out of it.

“We didn’t for the first 40 against Montpellier, but we have turned it around now, and have a bit of confidence.

“We want to reach the knockouts, and in a pool that is very tight, not giving Cardiff a point, and for us to have a bonus point, will have an impact. It is all in our control, but we have to keep delivering performances like that.”

1 Garry Ringrose to stay with Leinster as he signs two-year central contract
2 Dr Claire Molloy: ‘It is a privileged place to be, on the frontline’
3 Seán Moran: What nostalgia tells us about how the GAA sees itself
4 Rory McIlroy admits Portrush nightmare was catalyst for his return to the top
5 ‘For 25 minutes I ran out of oxygen’: Pepe Reina on his coronavirus battle
Real news has value SUBSCRIBE

Seán Moran: What nostalgia tells us about how the GAA sees itself 06:20
Six Nations rugby needs to be protected for terrestrial TV 06:00
Dr Claire Molloy: ‘It is a privileged place to be, on the frontline’ 06:21
My favourite sporting moment: Game, set and couch as Borg takes down McEnroe 06:29
Garry Ringrose to stay with Leinster as he signs two-year central contract 06:23
Here is your handy guide to sport on television this week