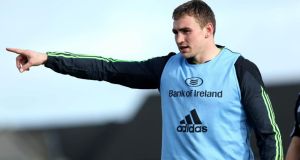 Anthony Foley has named eight changes to his Munster side for Saturday’s game away at Scarlets, with the some of the province’s international cohort returning to domestic duty.

Tommy O’Donnell, Felix Jones and Ian Keatley, who was forced to withdraw from last weekend’s win over Cardiff Blues due to illness, will all start at the Parc y Scarlets.

Keith Earls continues his comeback from injury with his third consecutive start, while Andrew Conway has recovered from the flu and CJ Stander also returns to his number eight spot following his recovery from an ankle problem.

The Scarlets, who ran out comfortable 32-14 winners over Connacht last weekend, are unchanged for Saturday’s Pro 12 fixture.

Connacht also travel to Wales, as they take on Newport Gwent Dragons at Rodney Parade on Sunday, with the Dragons fresh from last weekend’s 16-14 win over Leinster at the RDS.

Connacht coach Pat Lam has made three changes to the team which were soundly beaten in Llanelli, with Craig Ronaldson, Eoghan Masterson and John Cooney, who replaces Kieran Marmion, coming into the starting line-up.

Ahead of the game, Lam said: “Despite last week’s defeat to Scarlets, we remain in sixth place and a top six finish is still in our hands. However, we no longer have that safety net and the outcome of tomorrow’s game is important for both sides.

“The Dragons’ side will be brimming with confidence on their home patch after a big win last week and we know the challenge we face.

“The guys worked extremely hard in what was a tough week’s training but that work needs to be reflected in 80 minutes of team work on the field on Sunday.”