Injuries mount for Connacht ahead of trip to Belfast 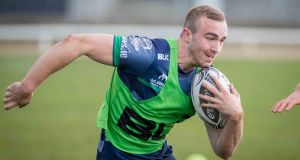 Academy back Ciarán Gaffney is named in the senior Connacht match-day squad for the first time. Photograph: Morgan Treacy/Inpho.

Anyone who watched the training match between the Irish under-20s against the Leinster Development XV will have some insight into Connacht’s current dilemma.

All elite young players, at least five of them left the field injured. Not good optics but indicative of the high attrition rate some games can generate.

Connacht’s injury levels have now reached a critical pitch with Bundee Aki the latest to fall. Aki, who will undergo surgery for an ankle injury, will not be back until February. His absence adds to the headache currently enveloping a frustrated Pat Lam, who described the week as the most challenging he has had at Connacht rugby. His tally of players in sick bay is now 21.

Lam faces Ulster with a 6-2 split on the bench for good reason. He has just nine backs available to him. The 21-year-old from Galway, academy back Ciarán Gaffney, is named in his first match-day squad.

“Losing both Bundee (Aki) and Conor (Carey) to long-term injuries is a big blow especially with our injury crisis at prop and midfield,” said Lam. “With 21 injuries in our squad it’s an opportunity for the next player still standing to come in and nail his role in our structures and systems.

“With the named squad not even training once together this week, there has been a huge emphasis once again on the classroom learning and mental preparation,” said Lam.

Ulster have their own issues although not so grave. One of those is Irish winger Andrew Trimble who will not make the line up this week. Jason Stockdale and Louis Ludik are on the flanks with two-try Tommy Bowe on the bench after his scoring against Clermont.

Because of Ulster’s five-day turnaround and their frighteningly uneven performance against the French side, Les Kiss has made six changes and five of those are in the pack.

Andrew Warwick and Rodney Ah You come in to the frontrow alongside captain Rory Best. Kieran Treadwell, who was eye-catching off the bench in the back-to-back games against the French, starts in the secondrow with Iain Henderson moved from blindside flanker to partner young Treadwell.

Clive Ross and Roger Wilson start in the backrow alongside Chris Henry, who holds onto his openside flanker shirt.

Ulster learned only too late against Clermont that if they want to win matches they have to think on their feet. When the physical Stuart McCloskey ran at the Clermont nine-10 channel, Ulster gained territory. But it was all too late to influence the outcome.

With Luke Marshall, Paddy Jackson and Ruan Pienaar starting Ulster have quality but if they start as they did in Stade Marcel Michelin, they will be playing a chasing game in front of their home crowd.

They were stung twice by quick tries within minutes of the first and second halves starting in France, which is one way to kill any momentum.

But Lam, a man who has already struck a blow against tradition by winning the Pro12 last season, will have to strike again against Connacht history and their trips to south Belfast.

Connacht beat Ulster 30-25 in Galway in their sixth league game but have not recorded back-to-back victories over the Ulstermen since 1997/’98. More damning for Lam and his hopefuls is that Connacht have not been victorious in Belfast since November 1960.