Tom McCartney will give all to Connacht for three more years 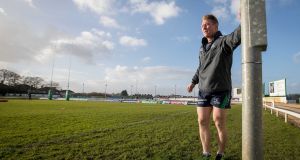 Tom McCartney at Connacht training at the Sportsground in Galway. Photograph: Morgan Treacy/Inpho.

A meeting with Pat Lam in the Sky City Hotel in Auckland four years ago has proved a turning point in the career of Connacht hooker Tom McCartney.

Lam believed McCartney was the perfect fit for his vision of Connacht – “ a player who would thrive on the challenge” – and McCartney’s dream of becoming an All Black had taken a dip with his Blues form in 2012.

Now the 31-year-old says his decision to join his former Auckland Blue’s boss in Ireland has “lived up to expectation”. After nearly three years in Galway, with a Pro 12 title and a second child expected in March, McCartney is looking forward to “putting everything” into Connacht for the next three years.

Taking himself, John Muldoon, and Ronan Loughney out of the equation, he says: “ We have the core of a good young team, the average age is young and there are some really awesome players on which to build. It’s exciting to be assured of what I am doing for the next three years and hopefully have some great success.

Lam’s decision to leave was “a bit of shock for a lot of us”, he says.

“I really enjoy working with Pat. I have known him for a very long time and I will miss him, but with the squad we have, all the young players, the structures and systems that have been set up, and everything Pat has instilled, we are in a strong place going forward. My heart was always wanting to stay at Connacht.”

His decision has been hailed by Lam as “a massive statement”.

“He’s part of the furniture – a leader on and off the field – and will continue to be a big contributor, not only for Connacht, but I believe Irish rugby as well”.

And McCartney, whose wife’s grandfather emigrated to New Zealand from Munster, is finally accepting that playing for Ireland could become a reality. “I have been reluctant to talk about it because it was such a long way away, but it is starting to get a little closer now. Jeez, if it happens I’d love the opportunity to put on the jersey, but at the same time there are guys there and you can see they’ve done a pretty awesome job of late.

“I’m not qualified yet [November], so I’ll just keep my head down and do everything I can do with Connacht, and if the opportunity comes, then I would love it.”

McCartney believes his game has improved since arriving “a little lighter” from New Zealand where he made 63 appearances for the Blues.

“I was probably able to run marathons when I first came here. It was at the end of the ITM Cup season when you are playing games every three to five days, so there’s not a lot of weights being done at that time. I was 106kg then, and now I’m around 112, and that changes the dynamics of your game. Obviously the Northern Hemisphere is set piece oriented a lot of the time, so I’d say I am a lot stronger now and my knowledge has definitely improved.

“I’d like to think I’m a better well-rounded player, and I just want to keep learning as much as I can. I’m not the finished article by any means, it’s just about trying to keep getting better.”

This evening in Kingspan Stadium, McCartney will make his appearance from the Connacht bench to face Ireland and Ulster’s Rory Best, who he believes is a sitter for the Lions, and possibly its captaincy.

“I’ve had a few chats to Rory. I enjoying watching him play and and I admire a lot about his game, and that is what you want to play against – players who are right up there in the world. As a personal battle, it’s awesome to play against a guy like that, but I’m not going to get carried away – it’s a small part of it. We might have the same numbers on the back, but at the end of the day I have to focus on my own role.”

Achieving a first success in Ravenhill in 56 years will not be easy, despite the recent dramatic victory over Wasps in the Champions Cup.

“It was great to get the win against Wasps, but it’s not going to help us against Ulster. They suffered a hard loss – they are all proud men up there and we know they are going to come out firing and look to revenge the loss they had down here earlier in the year.

“They are a quality side, so we will have to be on our game and do everything we can do if we want to get a win up there. There is a big focus on everyone doing everything they can off the pitch this week because we only have one solid day’s training.”