Guinness Pro14: How the expanded tournament will work 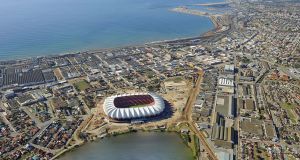 Mandela Bay Stadium in Port Elizabeth, South Africa, home of the Southern Kings who, alongside Toyota Cheetahs, have been added to Pro14

What is new tournament called? The Guinness Pro14.

What about the format? Each conference contains seven teams with an equal split from union, two Irish, two Welsh and one apiece from Scotland, Italy and South Africa. Participants play 21 regular season games with every team to play each other at least once. All home and away derby fixtures will remain in place. Italian, Scottish and South African teams will play an additional derby fixture to even out the schedule (eg Edinburgh will play Glasgow Warriors three times).

So teams will not play the same number of home and away matches in a season? Correct. Some teams will have 11 home matches in the upcoming season but then the following campaign will have 10 and vice versa for those who have only 10 home matches in the upcoming campaign. The initial balance of away fixtures was predicated on a number of factors including: stadium availability; club preference; player welfare and the accommodation of mini-tours involving fixtures with South African clubs.

What about the playoffs? The Pro14 Final Series will now include quarter-finals allowing six clubs to reach the knockout stages. The top three clubs from each conference will qualify for the Champions Cup while the fourth-placed team with the highest points total will claim the final Champions Cup place.

Does that qualification process for the Champions Cup include the southern hemisphere teams? No. South African clubs will not be eligible to qualify for EPCR tournaments at present.

Will the conferences be redrawn every season on merit? Yes. The number of teams by union will remain constant in each conference, but in order to ensure a competitive balance the teams will then be distributed evenly based upon their union ranking from the season before.

Final placings are determined by the order in which teams progress through the Guinness Pro14 Final Series. So for example the Scarlets finished third in the league format last season but went on to win the title. They would be seeded one in the Guinness Pro14 rankings the following season.