All Blacks appeal over how Sonny Bill Williams ban is applied 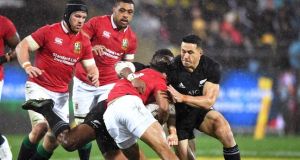 Sonny Bill Williams tackles Anthony Watson, leading to his red card in the second Test against the Lions in Wellington. Photograph: Andrew Cornaga/Inpho

New Zealand have appealed against how Sonny Bill Williams’ suspension is applied following his dismissal against the British and Irish Lions.

World Rugby confirmed on Monday that Williams would be free to play again on August 20th, therefore ruling him out of the All Blacks’ 2017 Investec Rugby Championship opener against Australia in Sydney the previous day.

High-profile centre Williams received a four-week ban, equating to four meaningful matches, when he was sent off for a shoulder charge on Lions wing Anthony Watson in the second Test at Wellington on July 1st.

Williams missed the drawn third Test with the Lions and the Blues’ final Super Rugby match against the Sunwolves, while New Zealand Rugby presented two pre-season Counties-Manukau matches as completing the four-match ban.

However, World Rugby ruled that the inter-squad game could not be considered as a meaningful match and would not form part of the suspension.

In a statement on Friday, NZ Rugby said: “New Zealand Rugby has confirmed that Sonny Bill Williams has appealed the World Rugby judicial committee’s decision not to include the All Blacks match on 11 August in the four-week suspension given to Williams following a hearing into the red card he received in the second Test against the touring British & Irish Lions.

“As the matter will now be decided by an appeal committee, no further comment will be made at this time.”

Williams, 31, became the first All Black in 50 years to be sent off in a Test match when he shoulder charged Watson in the 25th minute of the Lions game in Wellington.

The Lions went on to level the three-match series with a 24-21 victory before the final game in Auckland was drawn 15-15.

Unless he wins his appeal against World Rugby’s decision, Williams’ return to action is likely to come when New Zealand host Australia in their second Rugby Championship game at Dunedin on August 26st.