Women's RWC: No excuses as Ireland look to challenge 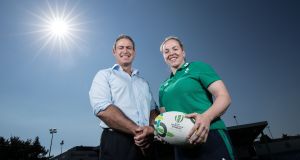 In 15 days Ireland will open the latest iteration of the tournament against Australia at the Belfield Bowl – a tweak to the women’s rugby calendar to avoid clashes means that subsequently the competition will revert to its previous four-yearly cycle – hoping that further glory beckons.

In the intervening period the primary focus of Ireland’s head coach Tom Tierney, who took over from Philip “Goose” Doyle after the 2014 Women’s Rugby World Cup, was to develop a squad capable of providing a robust challenge as tournament hosts.

On Monday lunchtime he announced the 28 players that will represent Ireland, whittled down from a training panel of 48, 12 of whom played three years ago in France and four, captain Niamh Briggs, Claire Molloy, Marie-Louise Reilly and Nora Stapleton, for whom this will be a third World Cup.

There is just a single new cap, Munster scrum-half Nicole Cronin – formerly on a soccer scholarship in the US – although the UL Bohemian player, along with Hannah Tyrrell, Katie Fitzhenry, Sene Naoupu, Ashleigh Baxter and Ali Miller all played for the Ireland Sevens team in the World Series this season.

A knee injury to outhalf Nikki Caughey meant that she was n0t considered for selection.

Ireland are ranked fifth in the world, but find themselves in a pool containing France (fourth), Australia (sixth) and Japan.

England, the reigning world champions and with a squad of fulltime professionals, are the team to beat, with New Zealand, providing they get past Canada at the pool stage, unbeaten over 13 matches since they lost to Ireland in 2014, looking to claim a fifth world title.

Tierney has been unapologetic in examining the credentials of a wide-ranging and occasionally inexperienced playing diaspora in trying to build a squad, accepting the absence of key personnel at times, redirected to Sevens commitments.

Against this backdrop, the Irish team has remained competitive, most recently involved in a Six Nations Grand Slam showdown against England at Donnybrook last season. He explained the rationale.

“We came into the job just under three years ago, and the plan was to prepare for a World Cup at home. We were of the opinion that we had to give opportunities to girls to grow the game in Ireland. We’ve given a lot of opportunities to a lot of girls who have shown they can compete at international level.”

The former Ireland scrum-half continued: “The IRFU have given us everything for this tournament, we are the best prepared team heading into a World Cup in our history. We’ve no excuses.

“Being at home can work positively or negatively for you. We’ve put in place plans that whatever happens will be a positive for the squad. We can use the crowd, and with the tickets being sold out for all games, having pretty much full attendance at UCD, (it) is a positive and we have to hold on to that.”

It was an attitude embraced by captain Niamh Briggs. “I want us to really cherish and embrace the fact that we’re at home. I think it’s a huge thing for us, and I don’t want us to run away from it.

“We’ve a responsibility on our shoulders now to be able to do ourselves justice, but also to the girls who didn’t make it. We’ve pushed each other really, really hard at training, and the 28 that’s picked is probably the strongest that we’ve had in terms of strength in depth at a World Cup, but it’s also a huge contribution from the girls that haven’t made it.

“I’d echo the same sentiments as Tom, I don’t think there should be any excuses for us. I think we need to go out and take ownership and responsibility, and be accountable for our performances.

“There is a good core of us who have played in the last couple of World Cups together, so it’s that experience that we can bring as a group rather than one individual player.

“We’ve spoken about it already in terms of the recovery period between each game being hugely important, because when you get to a stage like a World Cup then all the hard work has been done and everyone has prepared as best as they can, and it’s just how you manage yourself in between it.”

Ireland played two warm-up tests against Japan behind closed doors at UCD that offered more feedback than the outcome of the games. Tierney had no qualms about playing future pool opponents.

“We wanted to find out about Japan, we did that. Also, having spent six days here, we stayed on site at UCD, we got to see where things might be problematic off the field, and also positive; so from that perspective it was very good.

“Also to see a Japanese team up close was worth its weight in gold. We had certain things we wanted to do in those games, and certain things we didn’t do. We’ll plan accordingly for that match, and we’ve already a plan in place, and a dossier on the Japanese, as we have on the Australians and the French. It was a hugely beneficial exercise, those days in UCD.”

Ireland will enjoy a four-day training camp in Fota Island as they put the finishing touches to their preparations.