Hurricanes, Crusaders and Chiefs will be joined by South Africa’s Lions in final four 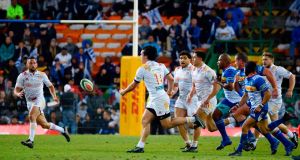 James Lowe, who will join Leinster at the end of the Super Rugby season, passes the ball to Aaron Cruden during the Chiefs’ win over the Stormers in Cape Town. Photograph: Getty Images

If the Super Rugby quarter-finals had a collective face, it would be one only a New Zealand mother could love. Three of the rugby power’s teams are through to the semi-finals, showing their ability to win tough and ugly, whether in biblical weather conditions or in hostile territory many time zones away.

The defending champions Wellington Hurricanes led off with Friday’s grinding 35-16 win over the ACT Brumbies, a team that controversially enjoyed home advantage despite winning six fewer games than their opponents during the regular season.

The Canterbury Crusaders followed up by slowly choking the Otago Highlanders to death in atrocious conditions in Christchurch, winning 17-0 by the brute force of their forwards.

The Waikato Chiefs then made it a perfect three-out-of-three for New Zealand by wearing down the Stormers 17-11 in a dour two-try battle in Cape Town later on Saturday.

“It wasn’t pretty,” said outgoing coach Dave Rennie, whose departure will be delayed until at least next week’s semi-final against the Crusaders in Christchurch.

Johannesburg’s Lions make up the final four, having survived a huge scare in beating the Sharks 23-21 at home. They will play the Hurricanes at home next week in a repeat of last year’s title-decider.

Bizarrely, it will be the South Africans’ first match against a New Zealand side this season due to the competition’s quirky scheduling.

The Lions topped the standings at the end of the regular season with a 14-1 record but belied their top seeding in the play-offs with an error-strewn display against the Sharks.

It took a 55-metre penalty kick from winger Ruan Combrinck in the final two minutes for the Lions to fall over the line.

1 Georgia and Fiji in line to join Six Nations sides in eight-team tournament
2 Malachy Clerkin: Sleep well Jack, you made us all happy
3 All in the Game: Jack fact-cheques money story
4 The Offload: All eyes on Leinster’s academy intake
5 Ken Early: Another Mourinho masterclass in going through the motions
Real news has value SUBSCRIBE