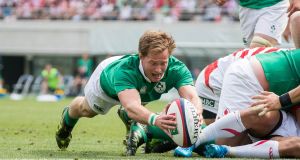 Kieran Marmion: “The derbies are probably the most anticipated games of the year for the players and for the fans”. Photograph: Ryan Byrne/Inpho

You could read it as a desperate act. Pulling two South African teams out of the hat like a white rabbit as a solution to a Pro 12 league marketing issue not only asks the clubs questions but the players too.

Why the two discarded South African teams should be so enthusiastically picked up makes for a colourful change of tack. Add in the possibility of American teams arriving and a view of the more the merrier seems to be central to current thinking.

Kieran Marmion is not a player to shoot that theory down. Even if the Cheetahs and the Southern Kings have lost their Super Rugby status, they are good enough for the Pro12.

But the travel and the altitude are unknowns and that will affect performance. It always does. The Cheetahs play their home matches at what is classified as moderate altitude between 1,000 and 1,700 metres. They have a much better home record than playing away.

“Yeah, that’s right,” says Marmion. “Again, that will be a challenge. It’s definitely a physical challenge going over there.

“I think the Cheetahs are at altitude, so that will be another thing that we don’t have over here. Away games over there will be pretty tough considering the travel and altitude.”

The last 20 minutes in matches have been proven to be the most difficult in thin air and the only way to prepare for it is to go to altitude and train there for a specified time.

Marmion sees the whole escapade as an interesting challenge.

“I guess it brings it out of the Celtic Leagues a little bit, expanding that way. I don’t see anything negative about it. I guess if the South African teams are competitive in it, hopefully it can help teams in the league to get better. The more competitive it is, the better for people viewing.”

The possibility of losing the derby matches between the provinces, usually played at round Christmas time to big crowds, is also something that might go if the teams are broken into two groups.

The format has not been finalised but if the two group suggestion holds the provinces will be separated.

“Yeah, the derbies are probably the most anticipated games of the year for the players and for the fans,” Marmion says.

The players, he says, have not been consulted about the changes. Employers making adjustments to work conditions, well it’s for the better of the league, will make the competition more attractive and hopefully draw in more people and give Irish players a taste of Super Rugby style.

That, at least is what Marmion believes. And he has a point.

“It’s hugely exciting,” he says having played a Junior World Cup and been on an Ireland tour there. “I was speaking to a few of the lads and they’re looking forward to getting a trip to South Africa and testing ourselves against the teams down there.

“It’d be good for the league, something people would look at to see how competitive we are against southern hemisphere teams.”