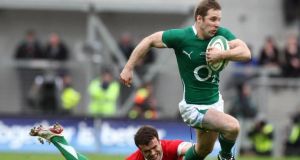 O’Leary started four of Ireland’s five games in the 2009 Six Nations Championship when Declan Kidney’s side won the Grand Slam.

It was only Ireland’s second Grand Slam, and their first since 1948.

O’Leary was subsequently selected for the 2009 British and Irish Lions tour of South Africa before being ruled out by a broken ankle sustained while on Munster duty.

“I have had an incredible career from my academy days in Munster to my last game in Montpellier, all of which have been extremely satisfying,” O’Leary, 33, wrote in announcing his retirement on the Navy Blue blog.

“I have realised my ambition of representing Munster and Ireland.

“Wearing the red and green jerseys has been a real honour.

“Highlights that stand out are the two Heineken Cup victories with Munster and winning the Grand Slam in 2009 with Ireland.

“However the most fulfilling experience is the unique bond and friendships I experienced through rugby. This comradery (sic) is what I will miss the most.

“For this, I would like to thank all of the teammates I have had the pleasure of playing with throughout my career.”

O’Leary, who played hurling and won minor Munster and All-Ireland titles with Cork in 2000 and 2001, began his Munster career in 2005.

He played nearly 130 games for the province before joining London Irish in 2012 and spending three seasons in England’s Premiership.

O’Leary returned to Munster in the summer of 2015 and finished his career with Top 14 club Montpellier last season.