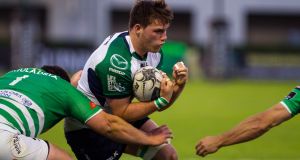 In a season of highs for Connacht, this was certainly one of the lowest. The desperation and pride of Treviso to hold on to the Italian Champions Cup spot proved enough to grab an injury-time win against a Connacht outfit that lacked its normal finishing prowess, and was murdered in the scrum.

If there is a consolation, it is that Connacht have qualified for the Pro 12 semi-finals for the first time by virtue of a losing bonus point, but it still will not sit well with Connacht coach Pat Lam to lose to a side that had only won two matches this season.

“Bitterly disappointed,” said Lam. “We acknowledge we are through to the semi-finals, but the number one thing is our performance and we will take a lot of learnings and will be determined when we get back to have a good week heading into a massive game against Glasgow.”

What was expected to be plain sailing for Connacht against the league strugglers turned into a disjointed and unstructured affair. Lam had opted to make 10 personnel changes, giving game time to youngsters and players returning from injury, but on this occasion, Connacht lacked their attacking fluidity that has been a hallmark of their season, and came apart in the scrum.

Despite the introduction of some of Connacht’s heavyweights, which did make a difference, they conceded a last-minute scrum for a forward pass, and the Italians, sensing their moment, took it with all their weight. Winning the penalty they craved, fullback Jayden Haywood knocked over the effort from just inside half-way to prompt huge celebrations from the home fans.

It had all gone plan in a blistering opening 15 minutes when Connacht looked confident, attacking from deep in their seasonal fashion. Boosted by early penalties, and with Peter Robb and Fionn Carr looking threatening, Connacht opened their tally with a Rory Parata try after 12 minutes.

From a penalty to touch, it was good off the top ball from Quinn Roux, and in a rehearsed move Robb and John Cooney came close before Jake Heenan supplied the perfect pass for Parata to crash over – Cooney adding the conversion.

Within five minutes Lam’s side had struck for the second – Carr finishing Jack Carty’s through-chip and Cooney converting. It looked like Connacht were well on their way to bonus-point win.

However Treviso took control, their scrum providing the platform. And for the next 30 minutes they out-muscled Connacht at the breakdown, and capitalised with 19 unanswered points.

Scrumhalf Edoarda Gori set up the first try, breaking from the back of the maul, and linking with centre Alberto Sgarbi with his partner Luca Morisi finishing off with ease. Although Hayward missed the conversion, it provided the home side with impetus.

The influential fullback always looked dangerous, linking with his midfield, but missed tackles from a usually well structured defence did not help Connacht’s cause. Number eight Abraham Steyn profited, racing up the line, brushing Tiernan O’Halloran aside, and diving over in the left corner. Hayward’s conversion closed the gap to just two points.

Connacht reclaimed the initiative from a penalty touch after Steyn was penalised for a shoulder charge on O’Halloran, but after three successive penalties Connacht were unable to score, going into the break 14-12 ahead.

The second-half start was ominous for what was to follow when Treviso, with the upper hand in the scrum, forced three penalties. The fourth, after Finlay Bealham had replaced Ronan Loughney, led to a penalty try, and Hayward’s conversion put the home side in front for the first time.

They continued to hold sway up front until the introduction of Robbie Henshaw and AJ MacGinty seemed to spark Connacht again. A turnover from Heenan provided the platform, and it was the Connacht of old as they attacked with pace, O’Halloran and Cooney eventually sending Robb through in the right corner, with the TMO confirming the Academy centre’s first try for Connacht.

Cooney added the conversion to put his side into the lead by 21-19. But it was not enough as another execution failure handed Treviso the initiative and the win.

1 Connell losing touch with the club championship is the real tragedy of Normal People
2 Ghosts and goalposts: The soul of street football in Dublin’s Gloucester Diamond
3 Gerry Thornley: Coronavirus crisis could be terminal for Ireland's rugby clubs
4 Shane Ryan: Shark attacks and gruelling shifts on a Covid-free Atlantic mission
5 Coming fourth in the Olympics didn’t change this fearless quartet, time did
Real news has value SUBSCRIBE