Bittersweet moment for Munster as summit comes into sight 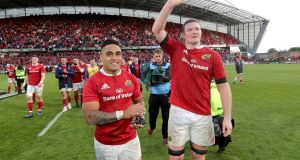 Francis Saili espouses the virtues that Munster cherish in a player, foremost of which is someone who puts the team first and drives unsparingly in pursuit of the common goal.

The 26-year-old Auckland native leaves the club at the end of the season, not by choice but because of budgetary constraints. South African Jaco Taute stays, Saili departs, most probably for Harlequins in London.

Munster’s director of rugby Rassie Erasmus argued that the parameters governing the decision were more nuanced than a straight either/or choice: “You can say it’s between them [Saili and Taute] but there are a few things more that play a role.

“The fact that Jaco can play 15 for us as well, cover there, and obviously the financial impact – it wasn’t really [a decision] between the two of them. Some people you can afford, other people you can’t afford. It’s one of those things, and you can only have so many foreigners.

“Otherwise, Irish rugby would be dead when it comes to the national team. So it’s a tough decision but we have to make a few decisions around affordability, quality and all of those kind of things.”

Saturday evening will have been a bittersweet moment Saili’s man-of-the-match performance – a reminder that when unshackled from injury, he possesses inestimable virtues as a player.

He enlivened a game pockmarked by substandard kicking and handling errors in the opening 40 minutes in particular, both teams playing with all the subtlety of red- and black-shirted dodgems: crash, bang, wallop; not a great picture.

The angst in the stands was palpable, the plaintive cries filled with a crankiness and exasperation. Leinster’s defeat on the Friday night at the RDS had left the Munster faithful a little skittish, fearful that another upset was materialising in front of their eyes.

The Ospreys, though, are nowhere near as good as the Scarlets on current form and, despite taking the lead through the boot of Dan Biggar, and being awarded a slew of early penalties, their narrow patterns were easily thwarted by a resolute Munster defence.

Saili strode into the maelstrom of uncertainty and grabbed the game by the scruff of the neck in the 25th minute, muscular in powering through a couple of tackles to dot down.

He was the catalyst again in the 60th minute for the defining try of this Guinness Pro12 semi-final. A stutter-step, a change of pace and angle, took him past a couple of tacklers and transformed the momentum of the moment.

The Ospreys had been chasing a kick towards the Munster 22 and in an instant were furiously backpedalling as Munster raided up the touchline. Conor Murray’s quick hands and awareness was the precursor for some fine interplay between Keith Earls, Andrew Conway and Simon Zebo, with the latter finishing the move for a try.

Zebo’s fingertip juggling to claim the scoring pass was a moment of rare skill. Munster’s back three share the same quick feet, an ability to beat opponents in cluttered spaces and the strength to bounce away from the initial contact point – neatly illustrated in Conway’s late try.

Even then, though, there was time for one final Saili intervention. His lung-bursting hustle to the touchline forced the young Ospreys wing Keelan Giles to put a toenail in touch. A try would have been immaterial to the outcome but Saili is driven by lofty and selfless standards. He is also a team man.

Erasmus offered an interesting insight into his views on attack and defence: “The defence always shows how tight a team is, how hard they work for one another.

“Attack is confidence, attack takes self-belief because there are so many variables and when you get attack right, like Earlsy did with Zeebs, everybody that was involved like Francis, that shows confidence.

“Confidence always takes a bit longer. With defence you can fix it immediately. You don’t really have to have talent, you just have to believe in the system.”

In his final game at Thomond Park, the New Zealander has vouchsafed the affection in which he will be remembered in Munster, even if initially, in the post-match hoopla, his contribution was overshadowed by the acclaim for the 13-year career of Donnacha Ryan who leaves for Racing 92 in the summer.

There were other positives on the day that Munster will pack for the final next Saturday at the Aviva Stadium. The scrum was utterly dominant. Dave Kilcoyne had a superb match, so too Niall Scannell and Tommy O’Donnell in particular. Tyler Bleyendaal provided the home side with intelligent direction after an off-kilter opening quarter.

Erasmus admitted, when asked about what Munster had gone through off the pitch this season in losing Anthony Foley, that he was surprised that the team made the Pro12 final: “There was a lot of other stuff we went through that wasn’t nice and was difficult. Yes, I am surprised and I’m proud.”

The summit is in view.