After poor season and embarrassing defeat to Munster, it’s winner takes all on Saturday 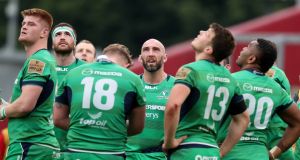 Connacht’s John Muldoon with his teammates after their defeat to Munster earlier this month. Photograph: Billy Stickland/Inpho

Pat Lam has long advocated for the top seven Pro12 teams to qualify for Champions Cup rugby, but it comes a year too late for the outgoing Connacht coach.

As it stands, however, Cardiff would have taken that seventh place, Connacht finishing in eighth, but the dynamics of the entire season would have changed, certainly for the last three fixtures as Connacht prepared for this season’s play-offs.

Thus, the stark reality facing Connacht today is the prospect of a season condemned to playing rugby in the lower tier of Europe, something unthinkable just 12 months ago when the Sportsground was rocking with fans as Lam’s side saw off Glasgow to reach their first Pro12 final.

On Saturday, some 300 Connacht fans head to Franklin’s Gardens in more hope than confidence – a reflection of a poor season after the highs of last.

Now it is winner takes all, former European and Premiership champions Northampton at home to Connacht with the prize of a home final against Stade Français, who on Friday defeated Cardiff 46-21.

Northampton are favourites, and understandably so – boasting a team of players with international credentials led by Dylan Hartley, with the power of Louis Picamoles and Courtney Lawes, and the pace of George North, Ben Foden and Samoan Ahsee Tuala.

Northampton, too, have something to prove. This year they have lost as many as they have won, and conceded more than they have scored, but, taking into account their quality and home advantage, Connacht will know they are in for a tough day against a side that just missed out on automatic qualification, finishing level on points with Harlequins.

In contrast, Connacht’s team has once again been hit by injuries – missing the experience of Tom McCartney and Ronan Loughney, playmaker Bundee Aki through suspension, and both Tom Farrell and Eoin Griffin.

Incredibly, Connacht will field a new midfield partnership for this crunch match, with Danie Poolman, the winger who has played centre on rare occasions, stepping into Aki’s shoes to partner Craig Ronaldson.

Jack Carty is the only recognised outhalf in the 23, with both scrumhalfs, John Cooney and Caolin Blade, on the bench. Some good news is the return of Niyi Adeolokun on the right wing after five weeks out with an ankle injury, while replacements Ultan Dillane and Matt Healy are expected to make an impact in their first appearances in 10 weeks.

But it is a serious test for the pack, led by John Muldoon, who along with Andrew Browne, are the only two players who remain from their last meeting in 2009 when Northampton marched into the Challenge Cup semi-finals with a 42-13 victory.

Although their form has been less than impressive this season, Lam is banking on Connacht’s traditional never-say-die attitude to reappear after two weeks of soul-searching following their embarrassing defeat to Munster.

“We know we haven’t been anywhere near our best in the last few matches, and that’s been a big disappointment,” he said. “We’ve had a very positive week on and off the training pitch, but we all now that the 80-plus minutes from 4pm is when it needs to count. If we don’t do it today, our season is over.”

Most Connacht fans remember when Warren Gatland’s side pulled off a shock victory at Franklin’s Gardens 20 years ago to qualify for their first European quarter-finals.

Not impossible again if Connacht find some form when they need it most.