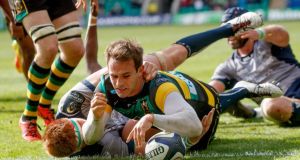 It was the last hurrah for Connacht’s bid for Champions Cup rugby, and true to their history, they went down fighting.

Having struggled all season to rediscover their Pro 12 winning form, it was always going to be a battle, but bowing out to Northampton, knowing they should be hosting Stade Francais this weekend in the play-off final, will hurt.

Restoring pride was one element to Connacht’s performance, but failing to achieve their seasonal ambition of Champions Cup rugby has consigned them to the Challenge Cup under new coach New Zealander Kieran Keane next season.

“I am very proud of the effort, but ultimately Connacht are good enough to play in the Champions Cup” said the outgoing Pat Lam, “and that will be always be the frustrating thing - not as frustrating as having our best Champions Cup season, beating Wasps and Toulouse, but not making the knockouts.

“That is the one that hurts the most this year. If we had got to that play-off, it would have been a massive achievement, and I still see that last five minutes in my head often.

“One thing we have always prided ourselves on, Connacht, win or lose, will front up, and I take my hat off to the boys, they worked hard off the ball.

“Unfortunately discipline cost us, little errors cost us, it has been the story of the season really.”

Now heading to Bristol after “signing off” at the Sportsground, attending John Muldoon’s wedding, and a week’s holiday in Italy, Lam has told his players the responsibility lies with themselves.

“I said to the guys, it’s their responsibility now. Kieran [KEANE]will come in next year and do a good job, but only if the boys front up attitude wise every week, and that is the responsibility of the players who will be there.”

So no farewell game at the Sportsground this weekend, but Lam, who always looked to spread the Connacht gospel in its five counties, says both the community and the players deserve credit.

“We came here not knowing anybody, and Connacht was without a doubt the fourth province, had the smallest budget and least amount of internationals. I leave here and none of that has changed, but a lot of it has changed I think in the four years.

“Only us and Leinster have won trophies - hopefully Munster can get the job done and get one as well; we have had more players who play for Ireland, and the participation right around the west of Ireland has grown.

“The one big highlight is the connection of the counties, to highlight we are not just a Galway team, but a west of Ireland team. Everywhere I have gone, both young and old people have got right behind this team - and it’s a credit to the boys and the way they have played.”

A somewhat poignant sign off then for Pat Lam, bowing out of Connacht with a defeat to his former club where his photo still adorns the walls as one of Northampton’s heroes. On Saturday it was Courtney Lawes, aided and abetted by George North, Louis Picamoles, Nafi Tuitavake, and Luther Burrell.

Conceding early was a blow for Connacht. Allied to having lost Eoin Griffin due to EPC Rugby eligibility rules on Friday, Andrew Browne during the warm-up, and Cian Kelleher after three minutes, nothing was going to plan for Pat Lam’s side. Their failure to control an up and under from scrumhalf Nic Groom resulted in a first minute try and conversion from Harry Mallinder, and the Tetley’s Stand was already singing of their sSaints marching to the final.

However Connacht’s reply was swift. Browne’s replacement James Cannon controlled the line-out, and when Niyi Adoleokun latched onto Ronaldson’s deft chip, he forced his way over, and it was all square after Ronaldson’s conversion.

The Saints regained the upper hand at the breakdown allowing Mallinder to knock over six points, but Connacht kept in touch when Northampton failed to release at the breakdown and Ronaldson narrowed the gap to three.

The only notable change at half time was assistant referee Pascal Gauzere taking over for the injured Mathiew Raynal, and it was not until the 56th minute when Northampton extended their lead after scrumhalf Nic Groom ducked through for a try.

There was a steelier resolution in Connacht’s play for the final 20 minutes, with John Muldoon leading the way. And none worked harder than hooker Dave Heffernan who grabbed Connacht’s second try from a methodical drive to the line after 62 minutes. However when replacement Naulia Dawaii was caught in possession deep in Connacht territory, Mallinder added the easy three points after 71 minutes to seal the win.