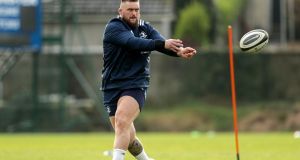 Leinster training has had a little more normality to it this week - we began passing the ball again. File photograph: Inpho

Week two of restricted training has continued with the basics, but with some differences from week one. Instead of three days training we have four. Our groups have been increased from six to 12 and in one key sense training has also had a little more normality to it. We began passing the ball again. That felt better.

It’s not that we haven’t had our own rugby balls in lockdown and haven’t remained familiar with them. I practiced every day with my dad. Ernie trucked it up the middle as a centre with Old Wesley for years so I’d say he has improved his passing skills too. I tried to get in as much ball work as I could because in a normal week we’d be passing and catching every day. I even think my girlfriend Elaine’s passing has improved too.

Of course, the proof will be in a match situation, and that’s another while away yet. So time will tell.

This week our group of six have linked up with James Ryan, James Tracy, Max Deegan, Cian Healy, Vakh Abdaladze and Josh van der Flier. To be honest, training in lockdown seemed tougher, perhaps because you were doing it in on your own and it involved plenty of running and weights. At least now we have a ball, as well as teammates, to distract us from the fitness demands.

Six years on and here we are, myself, James and Deego in the same group working on our skills with Noel Mac

Now, in addition to Noel McNamara, Leinster’s elite player development officer and the Ireland Under-20s’ coach, our expanded group is also being overseen by Hugh Hogan, our contact skills coach.

It may seem a strange way of doing it but it is another step in the right direction. Hugh knows his stuff and it’s great to have a coach for that specific skill set because it’s obviously a huge part of the game and of our game at Leinster.

Generating quick ball is make-or-break, how fast you can recycle the ball and protects it. Hugh is great at drilling those skills into us in every training session so that it’s habitual. He’s very meticulous.

He focuses on the small details, about tackle execution and ball placement at rucks if you’re the carrier. It’s your body height in your entry when you’re cleaning rucks. It’s your tackle entry. It’s everything. And it applies for every position on the pitch because everyone has to do it.

Re-learning our contact skills without contact has actually been a good way of understanding the law changes at the breakdown. He’s been drilling that into us, and what referees are looking at. We’ve had to visualise it through contactless reps, before being able to put it into practice, hopefully in a few weeks time.

Working with Noel Mac has revived old memories. Noel was my coach with the Ireland Under-18s. He’s more of a backs coach but, again, all the ball skills apply to every position now. He’s very good in the way he talks through the drills and he has a great rugby mind as well. It’s been good revisiting some of the things he would have drilled into me at 18.

He was also my coach when I began playing in the AIL with UCD as well. Coming through schools rugby at St Andrews you’d never see your stats from a game, like your tackle percentage and stuff, but he’d always have your stats and percentage laid out in front of you, so there was no hiding place. He was the first coach to introduce me to the professional side of rugby I’d say.

I’d been to a few Leinster trials in fourth year at St Andrew’s but I was still a back-rower then and I don’t think I was cut out to be a flanker or an ‘8’. I was still finding my best position, but it was weird getting a letter in the post in sixth year saying I’d been selected for the Irish schools team.

That was the 2013-14 season and at the end of it we had the FIRA World Championships in Poland. A lot of lads I played with on the Under-20s and even now were on that team like two of our expanded training group this week, James Ryan and Max Deegan, and three other Andrews boys, Jordan Larmour, Greg Jones and Johnny Guy, a lock/backrower who was a year below me.

We lost the final to England, which was like a premonition for the Under-20 World Cup final two years later. Sam Underhill was the England Under-18s captain and he was a unit back then, as he is today. Harry Malinder was on their team as well.

In the season in between, 2014-15, I played my first year on the Under-20s, when we finished seventh in the Junior World Championships. Tomas Quinlan landed a penalty to win our opening game against Argentina with the last kick of the game.

We also beat Scotland on a June afternoon in Calvisano and I haven’t played in heat like that, around 35 degrees, too often. But then we had New Zealand in Zebre’s second ground, what was Aironi’s ground, before we lost to Wales and beat Scotland again.

James Ryan, who had been captain of the Under-18s, was injured for that 2015 tournament, but he was back the following year to captain the Under-20s to the final. He always had that leadership mentality and presence about him. It’s great to have begun the journey with him, Deego, Jordan, Will Connors and Rowan Osborne, who were all on that under-18 team in Poland, and still be playing with them. And a good few others are with the other provinces as well.

Six years on and here we are, myself, James and Deego in the same group working on our skills with Noel Mac. It’ll be like this for a while as I think it will be another few weeks before we do any scrummaging unfortunately, which I’m already looking forward to all the same.

For the moment we’ll keep honing our basics, and a prop has to be able to do them all. No bother to us. Sure some props are among the best kickers as well. It’s just that people don’t know it.