IRFU head of elite development Peter Smyth believes few, if any, will fall through the net 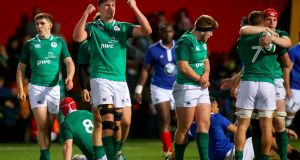 Ireland’s Charlie Ryan celebrates at the full-time whistle of the Under-20 Six Nations match against France at Musgrave Park. Photograph: Oisín Keniry/Inpho

Although they usually slip under the radar in the best of times, Easter traditionally marks landmark days for underage Irish international players as well as staging posts in their playing careers. Not this year obviously.

As a case in point, the Ireland under-18 squad were due to play France in the first game of the Six Nations festival in Marcoussis this Saturday, followed by matches against Wales and Italy next Wednesday and on Easter Sunday.

There are, for sure, way bigger issues and bigger sacrifices in life right now and as Andrew Conway said in these pages last week being a professional sportsperson, even amid the coronavirus pandemic, is still a privilege.

Yet whereas the vast majority of the established professionals will resume playing at some juncture, this time of year traditionally represents the window of opportunity for aspiring professionals at underage level.

As well as the under-18 (schools), both the under-18 (clubs and schools) and under-19 squads have also seen traditional Easter fixtures called off. In each case there would have been squads of 26 players.

Add in the 30-man squad which the Irish under-20s would have taken to the cancelled Under-20 World Championships in northern Italy, scheduled to start in late June, and that amounts to at least 108 underage players who will miss out on the chance to represent their country at various age levels.

While this ought not affect their pathway into the provincial academies and professional game unduly, one cannot be sure, and certainly for a good many these specific opportunities will never arise again.

But perhaps more relevantly in the short and longer term, as well as the under-18 schools’ three matches, the under-18 clubs/schools side (effectively the best of those who didn’t make the cut for the former) were due to play two away games against the England Counties. The under-19s were also due to host their French counterparts in Belfast and Dublin.

“Those age-grades are now technically finished and we move on to next season,” admits Peter Smyth, the IRFU head of elite development.

Nonetheless, Smyth and others involved in the IRFU’s pathway planning are keeping busy. On Wednesday he had meetings by conference call with the heads of department, the academy managers and the medical staff.

“We have a duty of care for the players in the right here and right now, checking in on them in so many different ways and then obviously we have to start the contingency planning for next season,” said Smyth, who took up his role with the IRFU in May last year after three and a half seasons as the director of Leinster’s academy.

While there will be no more rugby at underage level this season and the IRFU are managing the existing eight-week lockdown, they are also making contingency plans for an extension of this “off-season” as well as the under-18 and under-19 interprovincials, which are due to take place in August and September.

The four provincial academies can absorb 88 players and as it is 70 of those places have been taken up for next season. Some players would assuredly have staked a bigger claim for academy places over the next few weeks had they been afforded the opportunity to do so.

But Smyth believes few, if any, will fall through the net as a result.

“I would feel very confident in our system because the four provinces are reasonably agile and we can get around our country quickly, and these players have been benchmarked and watched for a long time.”

“You would hopeful that a lot of those 108 players are in the systems and part of the provincial pathways, so potentially we can keep continuing to provide as many opportunities for all players within our system after we get by and beat this thing.”

Even so, the under-20s are the unluckiest of all. They had recorded bonus-points wins in the Six Nations over Scotland, Wales and England, and would have secured the title with a round to spare had they beaten Italy at home, thereby setting up a shot at a second successive Grand Slam against France in Perpignan.

Those two games remain “postponed” and could, in theory, be arranged given the senior games against the same opponents almost certainly will be. But given the changing qualifications and dynamics of underage rugby, this seems unlikely and hence, they might not even be declared 2020 champions.

Furthermore, aside from the Under-20 World Cup pool games against France, Argentina and Japan, each of the participating countries was guaranteed two playoff matches as well.

For most of the players in the Under-20 World Cup these opportunities simply won’t come along again.