Nothing ventured, nothing gained for Six Nations - but at what cost?

To extract money from rugby, CVC will ask searching questions in return for their £500m 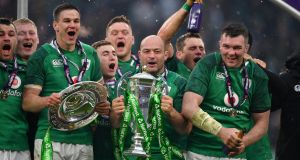 The Six Nations is considering a £500 million offer from CVC Capital Partners that would give the private equity firm a 30 per cent stake in the championship.

What links them is money from CVC Capital Partners, a very successful UK based private equity business whose owners have become stratospherically rich by following a simple rule: sell it for more than you paid for it. And where possible, use someone else’s money to do it.

Sport made CVC notorious beyond the discreet Mayfair and Park Lane world of private equity. The firm used two enormous loans to buy Formula One from Bernie Ecclestone in 2006 for $2 billion (€1.75 billion). Twelve years later that stake was turned into $8 billion, when they sold the racing series to Liberty Media. That, however, was just part of it. During its time in charge of F1, CVC are thought to have earned up to $14 billion in fees, share sales and dividends, generating a return of more than 300 per cent.

“We like owning it; we don’t want to sell it,” Donald Mackenzie, co-chairman of CVC once said in a very rare public utterance. “There are always some people who’d like to buy it: it’s a very good business.”

He wasn’t kidding, and now CVC has a plan for rugby.

In December 2018, Mackenzie’s company made another big sporting wager, paying more than £200 million (€230 million) for a 27 per cent stake in Premiership Rugby, the English club game’s elite league.

That now looks like the appetiser, with the main course a land grab for the international game, the implications of which could be profound for rugby’s future.

The figures being reported suggest CVC is seeking to buy around 30 per cent of the Six Nations Championship, an offer that dangles a £100 million carrot in front each member union just as World Rugby is hatching its own plans for a global event.

The sell to the IRFU and other unions is jam today versus the promise of potential riches down the road.

Whatever you think of venture capitalists, at least their motives are clear. They smell money: and are testing the willpower of the unions.

But the people in charge of rugby have a broader role, more nuanced and less quantifiable than a venture capitalist’s financial return. The job of a sports governing body is to balance sometimes conflicting objectives. They have an agenda to grow rugby’s grass roots and guard its rulebook, calendar and player welfare.

Former Wales international Gareth Davies was right when he said that the game was at a crossroads, the most significant moment since turning professional in 1995.

What happens in the next few weeks and months will shape what the game looks like for the next decade or more.

CVC makes its money from predicting the future. It has modelled scenarios that show where the money will come from and what the sport needs to do to maximise that return.

For the last 20 years or so, this money has flowed from a boom in media and sponsorship rights, transforming a few sports governing bodies into multibillion-euro businesses.

But there’s a hitch. And it lies in the difference between Formula One and rugby.

Formula One’s structure separated the commercial rights to the sport and its governance. This was the secret to Bernie Ecclestone’s enormous personal wealth: motorsport is governed by the Fédération Internationale de l’Automobile (FIA) but a separate entity owned, controlled, promoted and exploited the sport’s commercial rights (Formula One Group). This was the bit of the pie CVC was after.

Rugby is different. The commercial and governance roles are combined. To extract money from rugby, CVC will ask some searching questions, some of which will be hard for administrators to answer.

For example, if commercial returns are a priority, the TV rights of rugby would be sold to the highest bidder. What happens if say, Amazon come in for the rights to a new World Rugby competition? The rights fee would be high, but how many people would be able to watch it? Would the Six Nations remain on free to air television or pay per view? And what would happen to the happy anachronism that is the British and Irish Lions tours? Would the best players be able to perform often enough to make such tours or extra events viable?

More than anything, venture capitalist money craves simplicity: One event, all the best players in the world turning out on a regular basis. A Formula One for rugby. But this potential end game will only happen if the various elements - players, officials, governing bodies, the various leagues and the playing calendar - can be kicked in to shape.

Add to this complicated picture the shifts in how we’re watching sport, which is changing quickly. The internet has undermined the traditional TV media and sponsor rights markets. But in a world where everything can be downloaded to be watched later, live sport retains an ability to draw a crowd at a given time and place. This makes it unusually valuable to advertisers.

So as ever, there will be winners and losers. The world of rugby is already loaded towards the biggest unions. The best players will follow the money, wherever that might be.

A small number of people may be about to get very rich. But at what cost?