As Ireland emerged from Civil War, 6,000 rugby fans made the voyage to Swansea 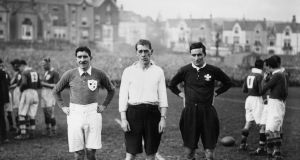 The referee BS Cumberlege with the two captains, Ireland’s Ernie Crawford and Wales’ Rowe Harding before the start of the crucial international in Swansea. Photo: Kirby/Topical Press Agency/Getty Images

“We cannot remember a sporting event which was watched with more unanimous and intense excitement than last Saturday’s match.

“News which flashed home to Ireland at the end of the first half of the game told of our countrymen’s lead, and the greatest sporting triumph of our time seemed to be within our country’s grasp. Victory would have meant so much – would have seemed an emblem of united Ireland’s hopes and possibilities.”

So read an editorial in The Irish Times on March 15th 1926 – two days after the Irish rugby team had seen their hopes of a Triple Crown and an unprecedented Grand Slam dashed by Wales in Swansea.

Not since the turn of the century (1899 to be exact) had Ireland beaten England, Scotland and Wales to claim the Triple Crown but in 1926, as the country continued to rebuild after the 1916 Rising, the War of Independence and the Civil War, it all seemed possible.

On New Year’s Day, 2RN (later to become RTÉ Radio 1) had begun broadcasting and on March 23rd – 10 days after Ireland’s defeat to Wales – Éamonn De Valera would set up a new political party by the name of Fianna Fáil.

As a country, Ireland was finding its feet and moving forward. In a sporting context this also represented major opportunity.

It was just less than five years earlier that the Government of Ireland Act had come into effect, dividing the country into the jurisdictions of the Irish Free State and Northern Ireland.

Rugby continued to be played as a 32-county sport but there was little other unity across the divided landscape of Irish sport. The Irish Free State football team had played its first ever match two years previously at the 1924 Olympics while the GAA’s Rule 27 – banning all members from playing or attending other sports – would not be abolished for another 45 years.

Indeed, The Irish Times took a pretty dim view of the GAA’s policies and firmly put its eggs in the rugby basket with an editorial a few days after the Five Nations had come to an end.

“If the Gaelic Athletic Association – while still practicing the racy old Irish game of hurling – would abandon both its unsportsmanlike political ban on other games and its wholly artificial and untraditional form of football, embracing Rugby in its place, a valuable body of brawn and muscle would be brought into the Rugby field.”

The wave of support for rugby was seen by those involved as a chance to lay down a marker in the new Free State and perhaps even outmuscle the GAA to assert itself as the, ahem, people’s game.

Wins over France in Belfast, England in Twickenham and Scotland in Murrayfield had put Ireland in the position of ending 27 years of hurt and also of becoming the first country to win the Grand Slam (referred to in the newspapers of the day as the Quadruple Crown) since the introduction of France in 1910 made it the Five Nations.

It was the second week of March and Ireland were facing a trip to Wales for their final game of the championship. It had been a gruelling campaign with the previous week’s win over Scotland in Edinburgh proving particularly tough.

On that soaking wet Saturday in Murrayfield, 40,000 people watched Ireland grind out a 3-0 victory over the Scots thanks to a single try (they only counted for three points at the time) from Jack Gage of Queen’s University Belfast.

Excitement was peaking as the week wore on towards the meeting with Wales on Saturday, March 13th and what would be the largest exodus of Irish fans of any sport that the country had ever seen.

Advertisements for special excursions to Swansea with the Great Western Railway and a number of other companies, such as LMS, began to appear in the newspapers immediately after the Scotland win as those looking to make the trip got together the 27 shillings and six pence (roughly €86 nowadays) needed for a trip in third class and a saloon or the more affordable 17 shillings and six pence (roughly €57 nowadays) for a place in third class and steerage.

Special trains were due to leave Harcourt Street at 6.50pm on the night before the match with fans sailing to Fishguard and then getting a connecting train to Swansea.

The Irish Times reported that up to 5,000 Irish people made what was, at the time, a significantly long journey, arriving in Swansea early on the morning of the game. With return trains not leaving until 11.40pm that night the travelling fans had, according to the railway companies, “plenty of time for a visit to the theatre after the match”.

While it’s difficult to see that suggestion being taken up by rugby or football these days, the travelling masses in 1926 were, in a lot of ways, no different to today, as The Irish Times reported from Swansea.

“Hostels and hostelries did a roaring trade; for Irish demonstrations make thirsty work, and by lunchtime fully five thousand Irish visitors must have been in the town.

“We had Free State Ministers, Londonderry Orangemen, Kerry Irregulars and a contingent from Portadown. It was an astonishing omnium gatherum – Irishmen of every conceivable type, most of them bedizened lavishly with green favours, some of them actually dressed entirely in emerald attire, and all of them completely certain of an Irish victory.”

And it was that complete certainty which led to Ireland’s downfall.

Wales had only ever lost once at the St Helen’s rugby ground in Swansea and that was to the All Blacks. What’s more, as the newspapers reported, many feared an Ireland loss because of the fact that they fielded a player wearing number 13 whereas Wales would never curse themselves with such bad luck.

Rugby was taken very seriously in Wales, as The Irish Times reported, and there would be no room for sentiment. Or, indeed, women.

“What a difference from Lansdowne Road or Twickenham, where at least 40 per cent of the supporters are females. But in Wales they take their rugby very seriously, and have no use for dilettante enthusiasts, whose interest in the game is mainly a matter of hero worship. Meanwhile, God Save The King was booed by half a dozen visitors who were probably seeing a rugby match for the first time in their lives.”

The anthem was, according to reports, sung with gusto by the vast majority of Irish fans who evidently wanted to make it clear that their political allegiances lay with the United Kingdom while also making for quite the spectacle as the brass band on the pitch conducted the masses.

But that was where the Irish enthusiasm ended as Wales pulled off a well deserved victory to shatter the championship hopes of Ireland and ensure that the title would be shared with Scotland.

Despite Ireland taking an 8-5 lead into half-time thanks to a penalty from George Stevenson and a try from Charles Hanrahan which was converted by Stevenson while Wales could only manage a try and a conversion in reply, the home side were in the ascendancy.

And they pressed home their dominance in the second half as Ron Herrera first crashed over to level scores before Rowe Harding scored the winning try to make it 11-8. In the dying seconds Ireland did come close to snatching victory as Tom Hewitt’s drop goal attempt – which would have counted for four points – fell short.

As The Irish Times reported, the day was for the Welsh. “We were beaten, and, to be quite honest, we were beaten soundly,” reads the report.

Ireland would have to wait until 1935 to claim the championship outright and not until the famous team of 1948 came along did Ireland complete the Grand Slam. But while it ended in disappointment, 1926 was a watershed year, as The Irish Times proclaimed a week later.

“If England and Scotland have not been at their best, there has been an unmistakable revival in Ireland and the Irish team has rather less than its deserts in sharing the international championship with Scotland, instead of holding it alone. It must be expected, therefore, that public interest in the rugby game will become even greater during the next few seasons than it has been hitherto.”

This is part of a series called From The Back Pages, examining stories and events that have made the sports pages of The Irish Times since 1859. If you have suggestions for stories you would like to see featured email rcroke@irishtimes.com or get in touch on Twitter @Ruaidhri_Croke. For more information on subscribing to the archive, see www.irishtimes.com/archive.

1 Gerry Thornley: Wild reactions to this Ireland team as fickle as the wind
2 IRFU not consulted prior to Minister Harris’ recommendation to cancel Ireland v Italy
3 Mayo GAA cut contact with Tim O’Leary after ‘Horan Out’ tweet
4 Cian Healy out of remainder of Six Nations
5 Cheltenham keeping a watching brief on coronavirus
Real news has value SUBSCRIBE