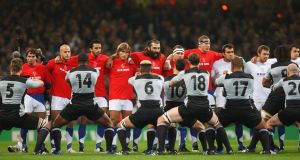 The French team face up to New Zealand as the latter perform the Haka before the dramatic World Cup quarter-final at the Millennium Stadium in Cardiff. Photograph: Stu Forster/Getty Images

This is tricky. To begin with, to be a fan or not to be a fan? The late great RTÉ football commentator Philip Greene never disguised his love for Shamrock Rovers, although he steadfastly maintained the apocryphal anecdote about him – “Oh f***! Rovers have scored” – was totally untrue. But he also maintained that being a fan was preferable to not being a fan. Because it showed a passion.

1 Sweden’s grim Covid-19 result: More death and nearly equal economic damage
2 Mother and five children sleeping in car while seeking accommodation
3 Donald Trump is an amateur populist – the real trouble is yet to come
4 Six counties had no Covid-19 case over past week
5 Amy Schumer, in tears: ‘I know how I am. No one else can deal with it’
6 Covid-19: Small minority of pubs putting health of customers and staff ‘at risk’
7 Naomi O’Leary: Ireland’s travel policy curbed by Britain
8 Johnny Depp trial: The hidden benefit of celebrity domestic violence allegations
9 Mary Trump: The inside story of why she wrote a tell-all memoir
10 Ex-Fianna Fáil TD apologises to Mary Lou McDonald over ‘damaging’ tweet
11 Paschal Donohoe neck and neck with Spanish rival Nadia Calvino in Eurogroup race
12 Warning of serious brain disorders in people with mild coronavirus symptoms
13 Varadkar accused of naivety over ‘Covid penalty’ on mortgage holders
14 Aviva Irish general insurance chief executive sues employer
15 Gardaí raid Irish office of failed German payments group Wirecard
16 On your bike: Good-value areas to buy a home a short cycle from central Dublin
17 Dave Hannigan: Notre Dame’s Fighting Irish leprechaun needs its ass kicked
18 Government targets young workers in economic plan
19 First ever woman president of an Irish university appointed at University of Limerick
20 ‘People are dying’ – private nursing homes’ plea for State help
21 What does the Covid-19 recession mean for interest rates?
22 Newton Emerson: Funeral raises questions over how much SF president McDonald is in charge
23 US supreme court to rule on Trump’s bid to conceal financial records
24 Land Rover lookalike Ineos Grenadier revealed
25 Airborne coronavirus: What you should do now to help yourself stay safe
26 Learner drivers could be forced to take driving lessons to renew permits
27 Johnny Depp severed finger during row with ex-wife, court told
28 August: An extraordinary debut novel about ordinary life
29 My husband had to become my carer after we had our son. I was diagnosed at 26
30 Rafael Nadal: A mental giant who plays every point as though it’s his last
31 Yellowstone: Kevin Costner looks like he’s just stepped on something sharp
32 Sonia O’Sullivan: Running in a bubble as the shoe wars raged
33 Coronavirus: Melbourne begins six-week lockdown after virus spike
34 Storey funeral highlights fundamental problems with Sinn Féin
35 Kinsale field closure leaves Corrib as sole domestic natural gas source
36 ‘They’ll kill me’: New transcripts detail last moments of George Floyd’s life
37 More people seeking treatment for cocaine use than for cannabis
38 Transatlantic data transfers once again in the dock
39 ‘A new lockdown in Melbourne has shattered our spirits’
40 Why does philosophy have a problem with race?
Real news has value SUBSCRIBE