Ulster welcome back trio of Ireland stars for RDS encounter 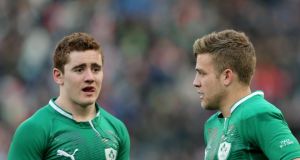 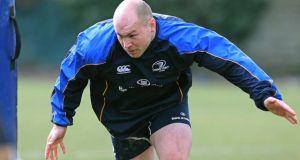 Richardt Strauss returns to the Leinster side for the game with Ulster at the RDS. Photograph: Lorraine O'Sullivan/Inpho

Short of the broad sweep of interest in the outcome and how the sides hang a week before Europe, look no further for sub plots than Ian Madigan and Paddy Jackson or Cian Healy and Ulster's Ricky Lutton, an acedemy tighthead prop filling in for All Black World Cup winner, John Afoa. There's the lineout too, Ulster’s Johan Muller against Devin Toner. The outhalves, lineouts and props, isn't it always so.

The Kiwi Afoa has returned to New Zealand for the birth of his third child with Ulster opting to keep Tom Court on the loosehead side and drop in the 27 year-old Lutton, who signed a development contract with the Province at the start of this season. Whether that is a mis match for international Healy should be known early on.

Joe Schmidt has sprinkled his Leinster side with six international players, Rob Kearney at fullback, the entire front row, captain Jamie Heaslip and Toner all starting with hopes of preserving their place at the top of the PRO12 table.

Ulster's needs, though, are more pressing and in order to stop the mother of all slides Mark Anscombe has also topped up his Ulster party with some heavyweight names and six changes to the side that lost to Edinburgh last weekend.

Springbok Ruan Pienaar is back at scrumhalf to help with Jackson's work load. The hybrid type of game the majestic South African plays from nine with his kicking and decision making takes pressure off the 21-year-old and has allowed Jackson perform better. Whether he place kicks or not will tell a lot about that heavily scrutinised part of Jackson's game.

Henry returns
Chris Henry also returns to the Ulster side having recovered from injury as does the rejuvenated number 8, Nick Williams, who played the second half at Murrayfield last weekend. Irish hooker Rory Best and winger Craig Gilroy also dip their toes for the first time in domestic fare since the Six Nations.

Unbeaten this season at home Leinster has decided to go with Brendan Macken to partner the team's most capped player, Gordon D'Arcy. Macken, who brings greaters pace and size to outside centre and Eoin O'Malley have been interchanging in the absence of Brian O'Driscoll, O'Malley starting against Glasgow with D'Arcy last Saturday.

And then there is Madigan, ballsy and with as much front as Bray promenade, analysts and fans can have a look at this head to head for the first time since December when Ulster made it 11 wins from 11 with a 27-19 win. Jackson, understudy to Pienaar in the kicking order on that occasion, landed three points, Madigan four penalties plus a conversion, a personal tally that has contributed to the Leinster outhalf currently standing as the most prolific in the league with 149 points from 18 games.

Hooker Richardt Strauss will make his 75th Leinster appearance after recovering from injury and takes his place in the front row alongside international colleagues Healy and Mike Ross. Toner, a second half replacement last weekend, partners Quinn Roux at lock where the other rumble is expected with Muller in the Ulster second row. Influential as a leader and a lineout specialist, Muller will gift Toner with special attention. The Irish lock is in no confusion about the breadth of his challenge.

"He (Muller) would be quite similar to Leo in that he is a leader of the team. He is one of their outstanding foreign players," says Toner. "He is their lineout general. He pretty much runs the pack. Around the field, I think he has got a lot of respect from the players as well. He leads from the front because he is a great player in the lineout and in the loose".

"You can tell from the scrum that they have that they have a very powerful scrum. That doesn't come from just the props. It comes from the whole eight. Every week, we scout the different lineouts. We have been looking at theirs. But, we have been focusing on ours first and then we are going to go after them where we can. He is a big challenge. I am going to try and steal as much ball as I can, the same as any other game".